Cover reveal and review: The Naturals by Jennifer Lynn Barnes 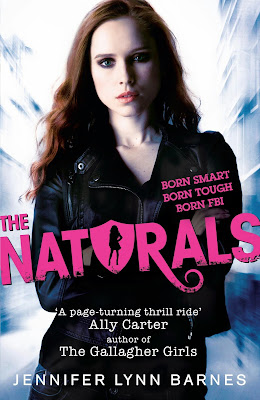 I was contacted recently by the lovely people over at Quercus about trying to make a big splash over the UK cover of this new book, The Naturals by Jennifer Lynn Barnes which is being published here on the 7th of November.  It's the first in a new series by the author of the Raised By Wolves series and I happen to adore it. All of the psychology that Jennifer Lynn Barnes writes into her stories absolutely appeals to my inner psychology-nerd!

What do you think of the cover? I like it. I love the font used especially.

Here is the official product description:

Identified by the FBI as uniquely gifted, Cassie is recruited to an elite school where a small number of teens are trained to hone their exceptional abilites.

For Cassie, trying to make friends with the girls, and to figure out the two very different, very hot boys, is challenging enough. But when a serial killer begins recreating the details of her mother’s horrific crime scene, she realises just how dangerous life in The Naturals could be...

When I was younger, there was a TV programme that my dad and I would watch together called The Profiler. I remember every week we'd watch it and then afterwards we'd sit and discuss the latest plot twists and story progression. I have a real fondness for that show. There have been other more recent crime shows that deal with profiling but that is still the show that has stuck with me. I find it all very fascinating. So with that in mind, when I heard that Jennifer Lynn Barnes was writing a new series involving young people solving crimes using different types of forensic psychology I really couln't request the book quick enough. I loved Jennifer Lynn Barne's previous YA series about werewolves and I loved how her background in psychology gave the story this added depth and another layer to the story that I found fascinating and I was sure that I would love The Naturals just as much. And you know what? I did. More so, even.

The Naturals was a brilliant read for me. I was hooked right from the start, as we meet our main character, Cassie, as she's approached at her waitressing job by this young man with a strange offer. Cassie has this awful past that's left her with nothing but questions and she hopes that maybe by joining this special unit of 'Naturals' that some of those questions might just be answered...

The Naturals refer to a group of people that have been gathered together because they have this innate skill of detecting emotion or truth or seeing patterns in numbers. Cassie's skill is that of a natural profiler, who can see the minor details of a person's appearance or behaviour and make a good guess about that person's psychological profile. Which is a real benefit for this new crime-fighting unit of special people that Cassie is recruited into. There's a bunch of talk of using the Naturals to work cold cases for the FBI for their own safety, but when Cassie's past catches up with her and intrudes on her present things start to become very different...

With an interest in psychology myself, I lapped up the different ideas and talents that surround the other characters that Cassie comes to live with.  She ends up meeting some very different and interesting people. I loved straight-talking and snarky Lia, and Sloane, the numbers/statistics girl who becomes Cassie's roommate. The relationships between the three girls was quite interesting to watch enfold, especially as it was a pretty rocky start with Cassie and Lia.  But I think the interactions between Michael, Cassie and Dean were my favourite. Yes, it is sort of a love triangle and some may groan and roll their eyes, but I enjoyed it. Especially when it came down to playing 'Truth or Dare' with people who can spot lies and/or can sense other people's emotions.

My favourite aspect of The Naturals is, of course, all of the psychology, the characters and their relationships with each other but there is also a really surprising and thrilling mystery at play here as well. With snippets from the mind of a serial killer interspersed with Cassie's narrative, there is a steady build-up to very actiony finale. I was on the edge of my seat and really didn't see that coming!

I am very much looking forward to reading more in this series! I love the idea of a teenage crime-fighting unit with special abilities. It fills me with excitement!
Written by Michelle Fluttering Butterflies at 07:19