REVIEW: Anything To Have You by Paige Harbison 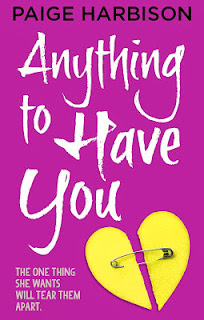 Anything To Have You by Paige Harbison is not being published here in the UK until February of 2014, but I just couldn't wait to read it.  It sounded really good - the story of two friends who are torn apart over a boy.

And Anything To Have You started off really well.  I had high hopes that it would be a story with characters and relationships and situations that I'd really fall for.  I can't really work out where this book went wrong but I did finish it feeling a little bit flat. While it is an interesting concept, at times, I felt like the non-linear narrative and the lack emotional highs distracted me from really connecting to this story.

Natalie and Brooke have been friends forever. Brooke is the popular, party-going girl and Natalie is her quiet and studious friend who is more comfortable curled at home with a movie. When Brooke convinces Natalie to come to a party things start to unravel. Because Natalie wakes up having not remembered a large portion of the previous evening ... and she wakes up in bed next to Aide, Brooke's boyfriend.

Two boys fighting over a boy isn't a new concept for a book and as it should be, a lot of the narrative is focused on the strength (and cracks that have appeared!) of the friendship between two girls. The story is told in five parts, alternating between Natalie and Brooke's point of view and jumping backwards and forwards in time in order to share key scenes in Brooke's relationship with Aiden and of the friendship between Natalie and Brooke.

I really liked Natalie and Aiden's characters. I thought they were nice and friendly and relateable and it is quite easy to tell how much they care for one another.  It took longer to warm to Brooke because of her sometimes selfish and self-obsessed behaviours. And I liked that the mystery of what happened between Aiden and Natalie took awhile to be revealed.  Like I said though, the jumps in time between junior and senior year and the change in perspective between Brooke and Natalie made me lose the flow and emotional build-up and that meant that big reveals that should have been more shocking or emotional didn't quite work.

I do love that Paige Harbison took things to a darker more mature place with this book - drugs, sex, alcohol, everything else. Even though I only rated this book three stars there is still quite a lot of promise there and I will still look out for future books by Paige Harbison!
Written by Michelle Fluttering Butterflies at 07:23