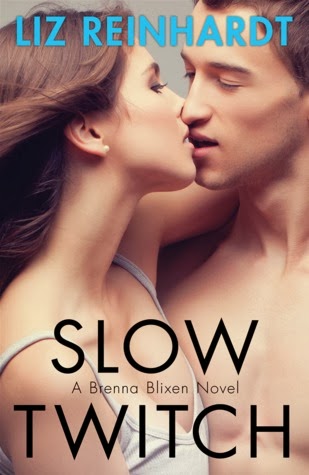 Slow Twitch by Liz Reinhardt is the third and final book in the Brenna Blixen trilogy and the structure and tone of the book feels very different to that of the previous two books in the series.  In Slow Twitch, instead of Brenna's perspective throughout, we get to also see both Jake and Saxon's viewpoints as well.  This is, I'm assuming, because the three main characters spend a great deal of time towards the beginning of the book apart from each other.

I thought the split perspective and the distance between the three main characters dampened my enjoyment of the book.  The first third of the book (which is a considerable amount of time as the book is over 500 pages) felt like three entirely different stories. First there's Brenna who is abroad in Dublin on a special writing course and meeting new friends and getting to better know old friends.  There's Jake, who is attempting to connect with (wealthy) real dad's family in New York and finally, Saxon, who has been busted for his drug-taking and drug-dealing ways and has been sent off to some small town to live with his great-aunt and is forced into working as a dishwasher in a diner.  All three different story lines and introducing some new characters.  Primarily, Cadence, a new love interest for Saxon and Evan, Brenna's new BFF.  Luckily for everyone, the three main characters do eventually end up in the same areas and do interact more with each other for the rest of the novel.

While I did enjoy seeing how these three characters end up, I found myself liking this book the least out of the three books in the trilogy.  I didn't like the addition of the new characters and couldn't find myself caring about them in the same way as Brenna, Jake and Saxon because I hadn't spent as much time with them. I also found that things were resolved far too easily. Conflict between characters vanished with a click of the fingers and while there is some interesting developments in Jake and Brenna's relationships, at no point during Slow Twitch did I feel any peril of them breaking up or even really fighting. Same with Saxon and Cadence. Everything just came too easily.  I'm all for happily ever afters, but not overly sweet and sappy HEAs that don't feel true to life.

I understand that Evan's character is the main protoganist of Liz Reinhardt's second trilogy but I really didn't appreciate how much of Evan's story is dumped into this one. And this applies throughout the book and not just for Evan but I'll use her character as an example, but intermittently there will be a jump in time and the reader is then told of the main events of what had happened during that time. That Evan or Evan's family did this or that and now voila! Evan's staying with Brenna for a week. These transitions felt lazy more than anything else.

So while this review seems overly negative, I didn't dislike the book.  I was just hoping that things had worked out differently.  I wanted the three main characters to feel more connected in the first part of the story. I wanted fewer additional characters as it felt forced and also like an advertisement for the newer set of books. I wanted more conflict and just more general emotion.  I just wanted more.
Written by Michelle Fluttering Butterflies at 08:37