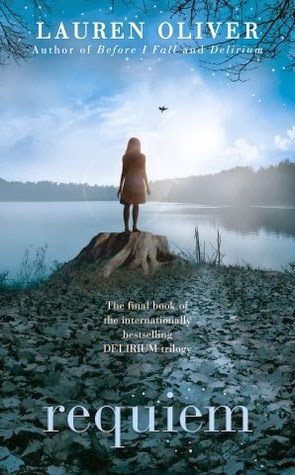 It had been a really long time since I'd read the first two books in this series, Delirium and Pandemonium, but I recently lent my copy of Delirium to a friend who really enjoyed it and she asked me what I thought of the entire series and I was ashamed to admit that I hadn't read this third book, Requiem. So I decided there and then that enough was enough and that I really had to carve time in my reading schedule to complete this series. And I'm really glad that I did.  While there will be no spoilers for this particular book the review below might contain some spoilers for the two previous books in the series. You have been warned.

Requiem by Lauren Oliver is the third book in the Delirium series and I think what I enjoyed the most about this book is the return to both the setting of the first book, Portland, and also the return of some of the major characters from the first book, notably Alex and Hana.  The first book in the series, Delirium, introduced us to Lena, her best friend, Hana, and also this wonderful love interest, Alex. And while I enjoyed the events of Pandemonium, especially as it gave us a better understanding of the resistance movement against the government, I really felt like a return to something more personal was the right way to go in this final book in the series.

So Requiem is told in an alternating viewpoint between Lena and Hana shortly after the events at the end of Pandemonium. Lena is trying to manage her conflicting feelings for both Alex, her old flame who has returned (surprisingly) alive and angry with her and also, Julian, the boy she helped rescue and to whom she has feelings for. And Hana, living in Portland and having been cured of deliria is living a very luxurious lifestyle and preparing for her wedding to Portland's new mayor, Fred Hargrove.

I really liked seeing the events of this story told by both Lena and Hana. Lena, obviously, has a lot to consider not only between Alex and Julian, but also the news that Lena had been unknowingly contacted by her mother sends her a bit into a tailspin. She continues to wander about with other members of the resistance in the Wilds trying to decide the best course of action and things start to look a little bleak in their fight for freedom.

Towards the beginning I found Hana's story less captivating but towards the middle as Hana's eyes are opened more to the situation she is in as well as the situation of other less fortunate people in Portland are in, I found her chapters to be a lot more interesting. I think the way in which Hana behaves in Requiem shows a lot of hope that change will occur in this society after the events of this story even if Lauren Oliver has left a lot to the imagination in her ending.

I feel as though some people might be a little upset at the way in which this book and the series has ended but I was fairly satisfied by it.  There was enough there to see where characters will go and do and also how the important relationships will end up even though it isn't spelled out definitively.  Things are left in the air slightly but it's always been sort of a messy and complicated situation so I'm glad that everything isn't tied up neatly with a big red bow and a happy ending.
Written by Michelle Fluttering Butterflies at 08:29