Earlier this year, I was thrilled and excited to attend a blogger event with Faber Children's books. It was an awesome afternoon and one of the highlights for me was hearing Jeff Norton read aloud from his upcoming book, Memoirs of a Neurotic Zombie.  Apparently I laughed quite loudly.  But it just sounded so wonderful and funny and fun that I couldn't help falling for poor Adam Meltzer, a germaphobe and ...zombie.

I'm thrilled today to share this fantastic cover of the book and also a fun extract. Memoirs of a Neurotic Zombie by Jeff Norton is being published by Faber on the 7th of August.

On to the good stuff! Here is the wonderful cover... What do you think? 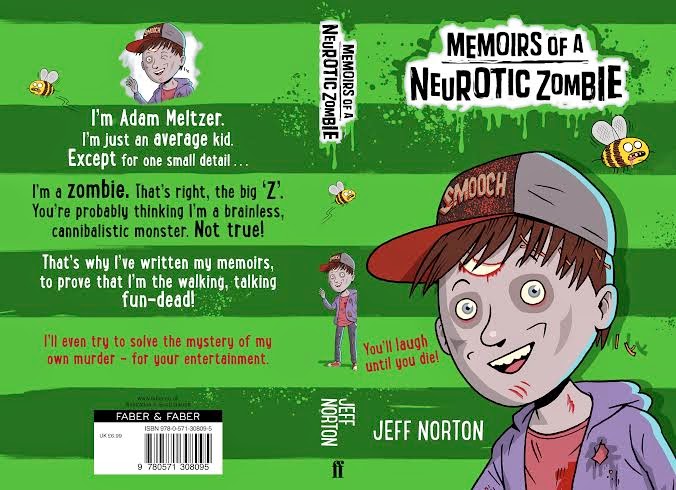 'My name is Adam Meltzer and the last thing I remember was being stung by a bee while swinging at a robot-shaped piñata on my twelfth birthday. I was dead before the candy hit the ground.'

Memoirs of a Neurotic Zombie is narrated by the hilarious Adam Meltzer - pre-teen, worrywart, and now zombie. Adam's family gets the fright of their lives when he turns up at their door desperate for a shower . . . three months after his funeral.

When most people think zombies, they think of eating people, and unintelligent monsters. But Adam doesn’t like germs. Or dirt. Or things being disorganised. So waking up as a zombie was definitely not in his plans, and the idea of eating people is disgusting. Getting stung by a bee doesn’t normally lead to becoming a zombie, and it seems incredibly unfair that it’s happened to Adam.

Soon Adam's back at school trying to fit in and not draw extra attention to himself, but when he sees his neighbour Ernesto transform into a chupacubra, and the beautiful Corina (Adam's number one mega-crush) turns out to be a (vegan) vampire, undead life is never going to bethe same again.

A hilarious adventure caper - if Ferris Bueller met Shaun of the Dead - all about friendship and being yourself . . . even if you're undead. 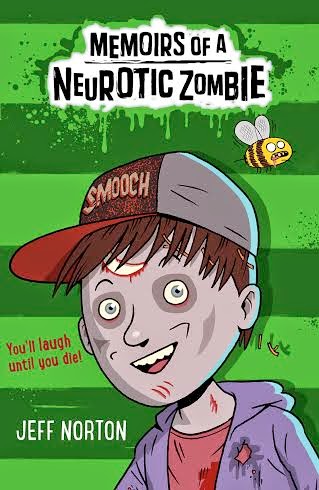 I came face to face with my ghastly complexion.

Since Mom was a doctor, we’d had all sorts of conversations about what to expect from puberty. I was the best prepared pre-teen for zits, pimples, whiteheads, blackheads, and patchy peachy fuzz. But the boy in the mirror wasn’t puberty personified, he was grotesquely zombified.

My flesh was grey, decomposing, flaking off. There was a five cm skinless patch on my forehead where my skull shone through like a crescent moon on a cloudy night. My eyes had lots their natural hazel sparkle and were now that trendy grey colour that paint stories called urban slate.

I was a monster.

I started at the fresk show in the mirror. I couldn’t really believe what was staring back. Was that really me? I wanted to stop, but I couldn’t look away.

‘It’s not all bad,’ offered my mom, stroking my hair and pulling out a coffin splinter. ‘Tell me one good thing about what you see.’

That was her little cheer-up game that she played whenever Amanda or I were feeling low. I tried to play along.

‘Well,’ I sighed, trying to ignore my skin. ‘My hair actually looks better.’

Death had somehow smoothed out my most unruly curls. I’d tried all of the commercially available conditioners, and none of them had the juice to relax my curls the way three months of coffin confinement did. Of course, my dark brown bouffant was still covered in grave dirt so a shampoo-rinse-repeat was definitely in order.