The Road to the Dustlands or, How I Found My Voice by Moira Young 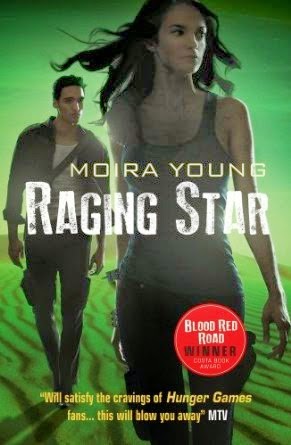 I'm incredibly happy today to be taking part in the blog tour for Raging Star by Moira Young! This is the third and final book in the Dustlands trilogy and I just think it's amazing.  I love the characters, the relationships, the story line and definitely this really fascinating world that has been introduced to us.

Below is an incredible guest post from Moira Young on her writing journey and I just think it's fascinating! I hope you do as well. And don't forget to leave Moira a comment in order to be entered into the giveaway.  Find out more about Moira Young or the Dustlands trilogy here:

The Road to the Dustlands or, How I Found My Voice
by Moira Young 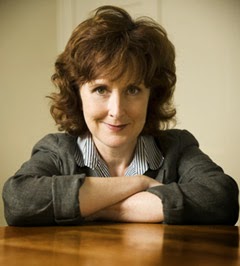 I was once an aspiring young writer. No. An aspiring Author is what I was. This aspiration began when I was eight and vanished in a glare of footlights when I was 12.

Author - which I would pronounce with a slight pause before the word itself and a very definite capital A - sounded pleasingly lofty and I loved to read so that was definitely what I would be. As a sideline to my life as an (pause, capital letter) Author, I would pursue the also-lofty-sounding careers of Archaeologist, Explorer and Spelunker; primed as I was by a steady TV diet of B movies to battle the mummy's curse, pirates, alien invasions, cannibals, jungles, smugglers, highwaymen, underground rivers and deathly dangers of all descriptions. The family businesses were teaching and preaching, none of that for me.

I'd been an early reader. I always had my nose in a book, reading quickly, inhaling books rather than properly reading them. You could take out nine books at a time from the public library. Nine books! Nine! All at once! The weekly Saturday morning library run was not an option but a necessity for two book junkies like my dad and me; the daughter whose flashlight-under-the-bedclothes reading habit would soon empty his pockets into the till of the shop down at the plaza. The one with the giant spectacles sign outside. I'd pounce on my delicious stack in a heated rush, all nine would be devoured by Saturday night and I'd spend the rest of the week gnawing on the bones.

I began my fledgling primary career with zest; rolling sheets of yellow paper into our old manual typewriter and bashing out long lists of titles for the books I would be Author of as my feet chilled on the sheet vinyl flooring of the basement. The fact that every single one came from my parents' bookshelves or a play by Shakespeare didn't make my pounding index fingers falter for a moment. Behold! I was typing! I was already an Author! Look at all these titles!

I copied out poems from library books in my best handwriting, bound them in construction paper covers with snazzy wool ties and the unlucky aunt or uncle or grandmother would be presented with it along with the unblushing lie that I'd written every word myself. Did the preachers spin in their graves? Or smile with benign understanding, up there with God in Three Persons? Once or twice, I wrote something I'd almost thought up myself - The Heirloom Mystery, awarded a puzzling sticky blue square by the Board of Education writing competition judges, and Kitty's First Case, a 'madcap' detective story involving laundry chutes and a large fish - but mainly I stole from and copied others.

I adapted my favourite books into plays; aped the circuses, talent shows and entertainments I saw; restaged the parades that I took part in as the least able member of the Gloria Code Twirlettes, the one always chasing her dropped baton as it bounced off among the spectators. All of these starring me, produced by me, directed by me and the inevitable happened: I fell in love with performing. Author no more. Gone. Forgotten. I would be an actress. A dancer. A singer.

After years of school plays and musicals and amateur productions of all kinds, and a history degree by parental diktat, and falling in and out of love many times, I took myself off to drama school in London. I showed promise, fell in and out of love and afterwards got a few jobs. I was a chorus girl in a West End musical and part of a cabaret group. At one of our gigs the audience came armed with fruit and vegetables to throw at acts they didn't care for and, yes, that night it was us. But for this or that reason (was the hail of produce a hint?) the career didn't take off, my agent said it would be best if I looked on acting as a hobby and after a time my voice fell silent. A few years of therapy rallied my spirits and I retrained as an opera singer. I showed promise, got some jobs, fell in and out of love, but after ten years, for this or that reason, my enjoyable but modest career sputtered, then stalled and my voice grew quieter and quieter.

I'd acted and sang and performed my way from twelve to forty years old; to lose myself, to find myself in the words and music of other people. Me, the child who'd once typed lists of other people's titles. Yeah yeah, Professor Freud, I know. I've done the therapy.

One day in my fortieth year, I found myself writing in my morning journal, "I want to write a book." And it wasn't that the thought came to me and I decided to write it down, my hand just wrote the words. I stared at what my hand had written. I said, "Huh. That's odd.", and immediately contrived to forget all about it. Soon after, I fell in love with a very fine man and asked him to marry me and luckily for me he said yes. I continued to sing from time to time but mainly did office jobs of various descriptions. As time rolled on, I did a short course in writing for children with a good teacher called Elizabeth Hawkins. There I met a nice woman, Sophie McKenzie, a journalist. She and I discussed taking Elizabeth's main course at the City Lit, but I didn't do anything about it. 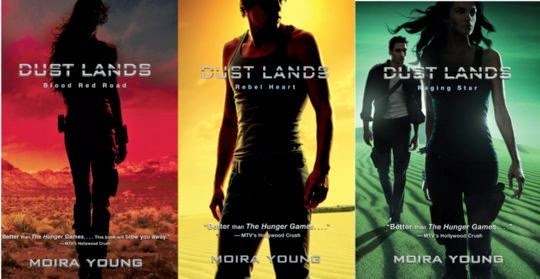 In the spring of my forty fourth year, itching to perform, willing to reinvent myself yet again, I took a course in sketch comedy. I wrote some sketches and began to think this might be something I could do. A group of us met outside class a few times with the idea of writing together. I was on my way to perform in our end-of-term show when I lost my footing getting off the bus, slammed head first into a wall and broke both my wrists. I never did get to perform my sketches.

I spent that summer lying on the sofa, doped up on painkillers with my arms encased in plaster. One wrist was a clean break but my right hand and wrist had been smashed to bits. I was lucky that my accident had happened right outside a hospital which specialised in dealing with shattered bones, thanks to all the gun violence in the area. In fact, I was doubly lucky; the top orthopaedic surgeon, Mr Khan, was on A&E duty that day. He literally yanked my shattered hand back into place.

My husband would bathe me, dress me, leave me water and a sandwich and go to work where he had a whole other set of problems to deal with. I didn't watch TV, didn't read, didn't think much about anything; the painkillers saw to that. Apart from one thing. I realised I had been stopped dead in my tracks. I believed that this was no accident. Yes, I'd worn wedges instead of flats, yes, I'd been carrying too many things, yes, I'd always been a bit clumsy, but ... talk about timing. Now I would say that my subconscious had failed to get my attention three years previously - "I want to write a book" - and had to stop me going off in yet another direction. It knew that the applause, if it came, would appear to validate this choice and I'd be hooked. Desperate times call for desperate measures.

At the time, all I understood was that this had happened for a reason and I should lie there on the sofa and be quiet and wait. That something would shift inside of me and when I got up from the sofa and had the casts removed, I would do whatever it was that I was meant to do.

And that's exactly what happened. As the first cast was removed, Elizabeth and her writing for children course at the City Lit were suddenly, urgently consuming me. Term was about to begin, what if the course was full? No, it couldn't be, this was what I was meant to do. If it was full, it would be a punishment from the universe for my blindness and I would have to wait a year. Let there be a space, please please please. With racing heart I called and yes! Yes. I'd just made it. There were a couple of spaces left.

And who did I see when I walked through the door on the first day of class, my right arm still in plaster? Sophie. One of the first things Elizabeth suggested was that some of us might like to join together in a writing group and at coffee break, Sophie suggested that she and I do just that, along with five other women. She was determined that she would make a career of writing. I was fearful. What if this was yet another road that would peter out? What if my subconscious was an idiot? That autumn day, my pen held in my weak left hand, I took wobbly notes as Elizabeth spoke and started on the road to the Dustlands.

Our writing group eventually settled at five members and we've met every two weeks for the past ten years. I wrote a picture book, two funny books for young readers and in 2006 began work on a book called Dark Eden which, over the next four years became Blood Red Road and then the Dustlands trilogy. I would never have stuck with writing without the support of my group and Sophie's guiding light. I would never have met her again were it not for that fall from a bus in East London.

It's been a long and circuitous and wonderful and difficult road to get to this place and I so very nearly missed the turning. It's only recently that I've realised that what I've been searching for all along is my voice. At last, at last, I've found it. Still, even if I could, I'd change very little. Except that I'd like to track down Mr Khan and thank him properly.

The reading early and endlessly and restlessly and movies deep in me, always and forever. Circus, parade, ballet, baton, acting, singing, love and loss, failure and applause. It's all made me the writer I am. As my Grandma Young would have said, "Moira, it's meant to be."

Thank you, Moira, for that wonderful guest post!  The Dustlands trilogy is amazing and I'd like to offer it to you, my lovely readers!

So I'm giving away the entire Dustlands trilogy (Blood Red Road, Rebel Heart and Raging Star) to one lucky reader. This is open internationally, just leave a comment below with either your twitter ID or email address and I will choose a winner randomly. Thank you to Scholastic for letting me part of the blog tour and for providing the books for the giveaway!
Written by Michelle Fluttering Butterflies at 08:00