REVIEW: Take Me On by Katie McGarry 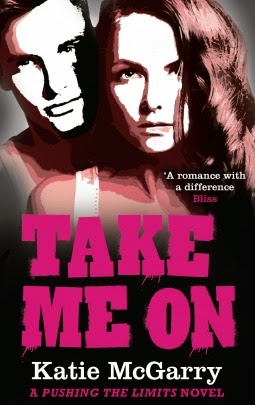 I am a huge fan of Katie McGarry's stories. I love her characters and their relationships together and I've always fallen hard her main characters and the love interests. I love how complicated and emotional everything feels and while I love some characters and relationships more than others, I've still also really enjoyed the character journeys and could feel strong things about where these stories were going.  ...And then I read Take Me On, her latest companion novel, this time focusing on the lives and loves of West and Hayley.  And for the first time, I've felt disappointed in the story and where it went.  And for that, I feel very sad.

Take Me On is told from both Hayley and West's perspective.  I believe the events of the story are told in tandem to other events in the same series.  Hayley and West are both going through some difficult times. West has been kicked out of his house by his parents and Hayley is also experiencing really difficult issues with her family.  She's living with a strict uncle who seems to bear some sort of grudge against her and her family and to be honest, none of Hayley's felt 'real' to me.  I just didn't connect to this aspect of the story and this emotional distance made it very hard to relate to Hayley and her story.

Hayley and West first meet as Hayley is on her way home and gets jumped by some neighbourhood kids and West jumps in to help not knowing that Hayley is in fact a kickboxing champion ranked nationally.  Soon after this, West feels slightly responsible for certain things and he ends up accepting a fight on Hayley's behalf. This fight is one West cannot win without help from Hayley and the two of them decide to join together, pretend to be boyfriend and girlfriend and train together for this upcoming fight.

I think part of my issue with this book is that there was too much macho posturing for my liking and a lot of attitude and some mysterious code of conduct involving honour felt slightly outdated for me.  And West and Hayley both get wrapped up in this and also sort of wrapped up in what other people think they should be.  West feels the need to fight in order to prove how manly he is and Hayley seems intent on keeping everything hurting her to herself ... and I didn't especially enjoy reading about either scenario. I think a lot of the drama could have been avoided by both Hayley and West opening up to those closest to them and having an honest conversation in which questions are asked and confessions are made.  And for whatever reason, I just didn't have quite the patience or compassion for how difficult that is to do for these two characters. During the middle and the ending of this book I just wanted to shout 'get there quicker!' and be done with it.

I don't think that this is a bad story at all, it's just a story that didn't appeal to me specifically.  I do still adore Katie McGarry and will always eagerly look out for any new books by her, but unfortunately this time I just didn't fall in love like I was expecting.
Written by Michelle Fluttering Butterflies at 08:00