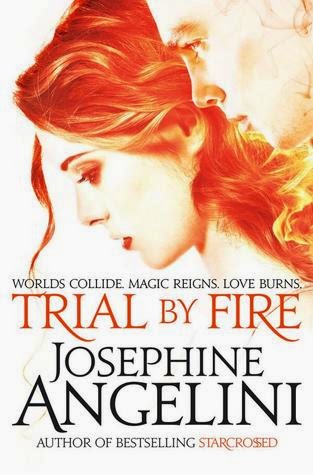 I absolutely adored Trial By Fire by Josephine Angelini! I thought it was exciting and addictive and a wonderful start to a new series and I cannot wait to read more. I love the idea of alternative worlds, the witches, the romance. Give me more!

In this first book, called the Worldwalker trilogy, our main character, Lily Proctor, lives in a world that is trying to kill her. She's allergic to everything and so isn't able to do all the things she'd like.  Which is why when she's invited to a high school party by her best friend, Tristan, she jumps at the chance to be normal for once in her life because she knows that there really might not be that many opportunities for her left.  The party scene is one that really broke my heart and kind of set me up for how emotional the rest of this book was. Because Lily faces something really humiliating and it's kind of the last straw for her. She runs off, hoping that everything she's just run from would disappear... and it happens.

Lily wakes up in an alternative world in which magic abounds and there are powerful witches called Crucibles.  In this new world, Lily is no longer a weak girl dying from allergies, but someone who holds great power and has the ability to make great changes and be either a force for good or evil. I absolutely adored finding out about New Salem and about Crucibles and how changing what Lily eats and drinks changes her body's chemistry and how the whole magic system works.

I just loved New Salem in general.  Lily meets some familiar faces here including her own alternate-self, Lillian, who is cruel and does horrific things but also Rowan, this beautiful boy who Lillian has had this destructive relationship with already and has left Rowan bitter and broken-hearted.  Lily and Rowan must team together, however, to find answers to how Lily jumped universes and to stop Lillian.

I loved the slow-burn romance between Lily and Rowan and also a lot of the new friendships.  It was interesting to see Lily interact with alternate-Tristan in New Salem and get his perspective on Tristan's behaviour previously.  I loved how action-packed the second half of this book became and I was on the edge of my seat to know what would happen next.  I really cared for all of these characters, including, probably strangely, Lillian, and I wanted the best for all of them. The direction the ending took makes me very excited to see some of Lily's home life being explored more (and also more sizzling scenes between Lily and Rowan!)

Everything about this book excited me and I'm gasping for the next book in the series. I thought this first book in the series really brought us some fantastic, complicated characters, really interesting relationships and an exciting new world.  And I want more.
Written by Michelle Fluttering Butterflies at 08:00