Really happy today to be taking part in the blog tour for Darkmere by Helen Maslin and Crow Mountain by Lucy Inglis! Really loved both of these books and the time slip and romance aspects to the story. Huge thank you to Chicken House for sending me these two books and I highly recommend both! Today I'm sharing my reviews of each of these books but do check out the other stops on the blog tour for other fun things! 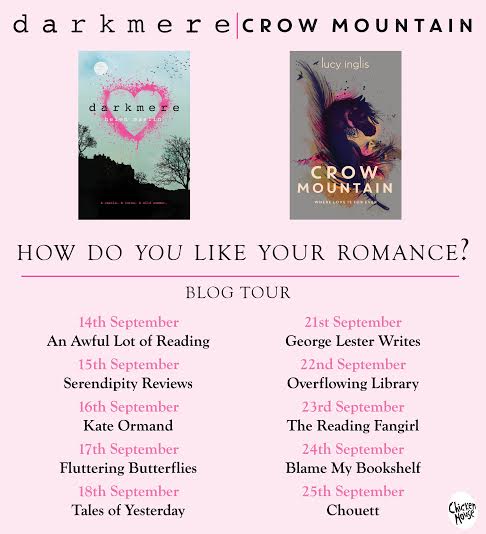 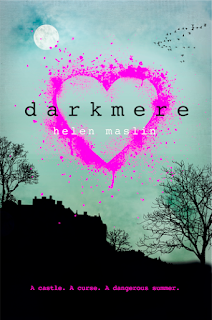 I absolutely loved Darkmere by Helen Maslin! I'd followed the author on Twitter for quite some time and because she's lovely I was, at first, a little bit nervous to start this book for that reason. There was no need to worry as I absolutely loved it. I thought Darkmere was really pacey and addictive as well as being quite emotional.

Darkmere tells the story of two girls separated in time by hundreds of years. The first, Kate, in the modern day has been invited to spend the summer at a remote castle alongside the beach. Good-looking, popular Leo has invited Kate and some other friends to stay in this castle he has just inherited. Kate fancies Leo so says yes, despite the differences in their wealth and social standing. Darkmere isn't at all what she imagined it would be and soon she finds herself interested in the local legends of the castle and of the ghost who is said to haunt it.  This is where Elinor comes in who tells us her story in the 1800s and how her own social standing and romantic prospects are called into question and how she eventually ends up at Darkmere.

I really loved both Kate and Elinor's perspectives in telling the story. I was hugely invested in both of these main characters and I found myself pulled easily into their stories and was rooting for them throughout, even when it became more obvious that Elinor's story becomes more tragic. What I loved about both of these story lines was that they are both hugely interesting and as the end of their chapters loomed little tidbits of exciting things were mentioned that left me hugely intrigued by what would happen next. There is quite a bit of surprise and twists to the story that kept me entertained and hooked.

Another favourite aspect to the story is the setting on the English coast line and discovering Darkmere's history with smuggling and how that aspect of the story unfolds as a bit of a surprise. I lapped every detail of this part of the story and now having finished the story I'm quite excited to learn more! Elements of historical fiction don't always grab at me the way the historical bits of Darkmere did, so I was quite surprised by this.

The romance elements to both of these stories ends up being a little bit dark and in a way, doomed and I loved that type of love story.  Leo definitely isn't all that he seems, however I still found myself being slightly won over by him anyway. There was something appealing about him anyway. And also the other characters who come along on this summer get away. It's always nice to see that first impressions aren't always the best at showing a person's true character!

I absolutely loved Darkmere and I highly recommend it! Dark, addictive, romantic and very fast-paced. This is definitely a book to look out for. 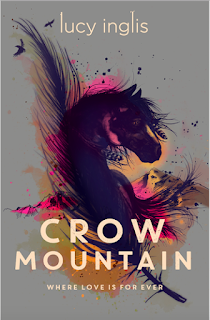 Crow Mountain by Lucy Inglis was another hugely fun read. I have to admit that I didn't know very much about the story before I decided to dive into the book.  And you know what? Crow Mountain was hugely interesting and something that felt a little bit different as I was reading.

Crow Mountain has two time lines, a story set in the modern day and another set in the 1800s as settlers are moving west.  Both characters in each of the story lines share many similarities. They both end up stranded in the Montana wilderness, both fall in love and their stories end up being a little bit more intertwined than you'd think.

In the modern day, we are introduced to Hope, a teenage girl who is in Montana on holiday with her mother. She is a little bit shy and reserved and more than a little intimidated by her bossy mother who does her best to mould Hope into a miniature version of herself, even though Hope has different interests and dreams to that of her mother. And there is also Emily, a girl who has promised in marriage to a man she's never met in San Francisco and shipped off from England to settle. Hundreds of years separate Hope and Emily but their destinies are linked.

Again, historical elements to a YA book are not story lines that grab my attention normally. However, I absolutely loved the historical parts of Crow Mountain.  While travelling to San Francisco, Emily's carriage is destroyed and she becomes the only survivor in the midst of the Montana wilderness. Soon, she is rescued by horse trader, Nate, and lives with him for some time, slowly learning to become self-sufficient and accustomed to living in a very different environment to the one she has been brought up in. What I loved about Emily's story was witnessing her gradual changes from somebody who apologises for her the space she takes up in the world to that of a woman who can hold her own. I also found it really fascinating to hear of her experiences with the Native Americans in the area, the detail about the railroad expansion in the west, and also the fate of the bison.

I think I was less enthralled by Hope's story in the present. Her mother, Meredith, takes on a bit of a caricature role and I didn't feel as invested in Cal's story or the reasons why he is persecuted by his community or the police. However, I did quite like Hope and the ways in which she eventually stands up for herself.  I think perhaps if there were more page time for Hope and Cal, I would have eventually loved them more. However I think that Emily and Nate stole the show for me!

As for the romance, I really loved Emily and Nate. It wasn't always great between the two of them, Nate makes choices I didn't agree with that take away Emily's choices for her own destiny but he makes up for that later on. The two of them were just not what I expected. Nate wasn't what I expected. And as I said, I loved seeing Emily's transformation and that was very much down to Nate pushing her into becoming more independent. The ending felt a little bit rushed and I think could have done with a bit more time to develop fully.

I wasn't quite sure where or how the two stories were ever going to meet and it really is in that last third of the novel that things start coming together and making sense. The ending is explosive and surprising and emotional. It plays a little bit with readers' emotions, but I also found myself swept away in the events that occur and hoping for the best.

Crow Mountain was a lovely story about breaking free from expectations, striking out on your own, being independent and taking risks with your heart.


Darkmere by Helen Maslin and Crow Mountain by Lucy Inglis are out now and published by Chicken House. For more information visit chickenhousebooks.com
Written by Michelle Fluttering Butterflies at 08:00