Do you guys remember several years ago I used to hold a month-long event on this blog called Love Month? It was basically a celebration of romance in YA and I would read lots of different types of romances and have giveaways and interview authors and have guest posts and everything? Do you remember? No? That's okay.

It was something I really enjoyed doing but it was also a lot of work.  And it got to the point where I'd get blogger burn-out trying to cope with all of the expectation that I put on myself.  But also, every year since then I've wanted to do it again, even unofficially.  So this year I thought I'd just go for it.  None of the other times I did Love Month had a theme but most of the books I read for previous Love Months didn't include that many LGBT romances either.  So for this year's Mini-Love Month event, I thought I'd only read books involving an LGBT story line.  Because why not?  Unless you're an author of an LGBT story line or you're just a fan of LGBT books and want to volunteer to be interviewed or provide a guest post, I won't be doing much else in February except read and review some (all?!) of the following books.  But it should still be fun anyway. At least for me!  Here are some of the books I'm hoping to get to during the month of February... 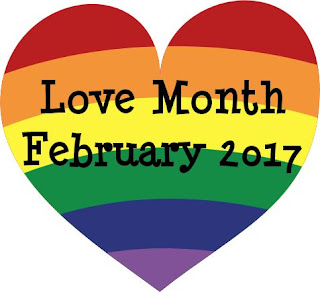 The Robin Talley was a leftover review book from early last year, or the year before? SORRY. The Adam Silvera is obviously fairly new and I bought Wildthorn in a library sales age ago.  I think I also have Hero by Perry Moore in my loft. I'm not sure, so I won't count it here just yet.

There are some mighty intriguing upcoming books with LGBT story lines, yo. I am excited. I also really wanted to keep the number of books I've requested from Netgalley to an absolute minimum until I have enough time to read and review the other books I've requested (8 of them which are over 3 months old!) but I literally could not resist any of these four books above. I have no regrets.

What can I say? I've been stock-piling this collection of LGBT YA reads for awhile! Mostly because despite this month in which I'm focusing on just LGBT YA reads, reads involving these story lines are something I want to read year-round as well. Which is why I've been buying these books on the regular. I think I'm most looking forward to reading a lesbian retelling of Macbeth in As I Descended. MORE LGBT retellings, that's what I say. But also If I Was Your Girl too.  I've heard good things.

I really think that I have enough to work with in the previous three categories but I thought I'd share with you some of the titles highest on my wish list. Which isn't actually because I want to read them more than the others on my list, these are just the cheapest on my list. Hush. No judgement. I only buy cheap e-books. Because I'm a cheapskate. The Sara Farizan and CB Lee books would probably be at the very top because they're also by POC authors and I feel like that's important too.


Will you be reading any LGBT books in February?
Written by Michelle Fluttering Butterflies at 08:00