REVIEW: Here Is the Beehive by Sarah Crossan 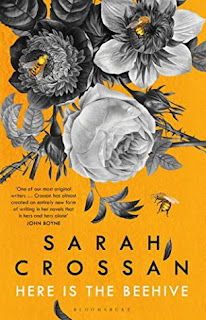 Well. I really adore Sarah Crossan's verse novels from young adults and I was excited to read something from her aimed at an adult audience. I was intrigued by the title, Here is the Beehive, and the cover is gorgeous. I think by this point, I might just be tempted by every verse novel going.

Sarah Crossan has such an incredible skill of creating relatable characters with interesting relationships. And Here is the Beehive was such an emotional journey for me. Already it takes such skill to write a novel in verse, but I was amazed by how many surprises there were in this book, how I really came to know Ana and understand her decisions. Here is the Beehive is about Ana, a solicitor who has been having a three year affair with (married) Connor but when the worst happens and Connor dies, Ana's grief is largely invisible because nobody knew that he meant anything more to her.

This story is told in the present as Ana is struggling to come to terms with her own grief and complicated feelings about her relationship with Connor but it's also told in the past, so we can see Ana and Connor's relationship forming and the lines that are crossed and the decisions that are made, the justification. Everything is pretty messed up, the exploration of this relationship was all sorts of messy, with promises made, lines crossed, the emotional destruction, the lies, the secrecy, the neediness, the insecurity.

One thing that really stood out for me with this book was that I loved that as soon as I thought I knew these characters something unexpected is revealed. It felt like there were plenty of surprises in this story even when things probably seem straightforward.

Here is the Beehive was one of the stories that creeped up on me. I hadn't realised how emotionally attached I was until that final quarter of the book where all the heartache just built into this crescendo. Beautiful.
Written by Michelle (Fluttering Butterflies) at 09:00