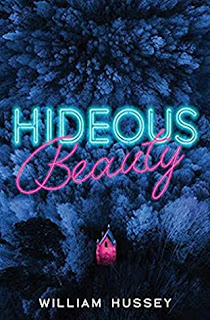 Hideous Beauty by William Hussey has been one of my favourite reads of 2020. The love between Dylan and Ellis was so beautiful and emotional and I felt absolutely wrung out after reading this book.

The main premise of the story is that because of a leaked viral sex video, Dylan is forced to come out to his parents about his and El's secret relationship. They decide to go to a school dance to get the awkwardness of seeing their classmates after the video is seen out of the way. Things seem to go well with Dylan's parents and everyone at school seems to accept Dylan and Ellis but even so El becomes distant and withdrawn and as they're driving home, Ellis loses control of the car, they end up in a lake and Dylan is pulled free with Ellis left to drown. When Dylan wakes up in hospital, he vows to find out all the mysteries of Ellis which boils down to the following:

1) Who released the video of Dylan and Ellis?
2) Why was Ellis acting so weird at the dance?
3) Who saved Dylan and left El to die?

Honestly, this book ripped my heart out. It was pretty impressive how quickly I fell for Dylan and El: their relationship is barely introduced in the pages of this book before the car accident but that entire scene had me crying my eyes out. The love between these two boys was so pure and absolute and what happens is devastating. And Dylan's grief is such an intense feeling that I completely believed and felt too. And there's just no let up - following the car accident itself led quickly on to El's funeral which was brutal. The depiction of grief in Hideous Beauty was so intense and palpable.

As Dylan gets more involved in exploring the mysteries that led up to Ellis's death, it was kind of interesting to see how and where the cracks appear in what seems to be acceptance of Dylan and El's relationship. Hideous Beauty is a reference to a special place the two boys go, but it also felt like an excellent description of this book - that the incredible love between these boys (Beauty) exists in a world where parents disown their children, where awful people prey on the vulnerable and where true acceptance is not met (Hideous).

This book was everything. Intense, romantic, emotional, heartbreaking. I urge you to read it and be as swept away in these characters as much as I was.

Written by Michelle (Fluttering Butterflies) at 18:27