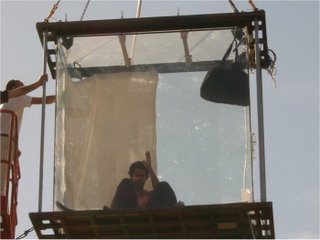 So David Blaine's doing it again. I've completely lost track of all the weird (and wonderful) stunts he's done .. He was .. buried alive, right? Was that the one with the ice? And he stood on that pillar. And of course, in the box. And now he's got a new thing - Drowned Alive But I always just loved his Street Magic stuff - he always appeared to be a little strange, which I like. Did anyone see that interview he did? With the 'evil eye' I couldn't stop laughing. 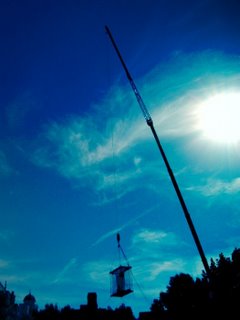 Anyway, the pictures are from the Above the Below stuff he did in London, was it two years ago? It seems like forever ago, so it must have been longer. Anyway, we went to go see him, an he waved at us! I'm sure it was us he waved at. Maybe he did it more than once. It was quite late into his thing, and he must have been absolutely knackered and tired, but he still waved at anyone who waved at him. I loved that about him. We bought his book he wrote (I wonder if anyone solved that puzzle or whatever) but never actually read it. If I can find it, it might be worth a go.. Still, can't wait for the new stunt.. even though it'll be in New York. But can you blame David Blaine for not coming back to London, when the last time he tried it here all those people threw stuff.
Written by Michelle Fluttering Butterflies at 09:20