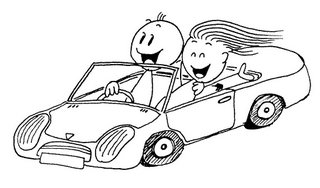 So, fear drives (no pun, I swear) a large portion of my life. When I was little, I had this kind of traumatic go-karting experience (I was asked to leave after entirely wrecking this poor woman's course - FIRST thing in the morning), so when it came to learning how to drive, I kind of struggled anyway. It took a lot longer than it should have for me to get my driver's license (but only two attempts at the test) and that was last April. Or was it the year before? It must have been the year before. Oh my god, I hadn't even realised - it's been nearly two years since I've got my license, and do you know how many times I've driven on my own? Yep, never. I've never driven unaccompanied, and really never driven that much with someone else in the car either. It's the fear. I couldn't bear the idea of a bad accident or the guilt if something ever happened, the responibility really is too much for me. But I have to grow up sometime.
Written by Michelle Fluttering Butterflies at 16:25