Saturdays are usually my morning to sleep-in whilst my husband takes baby Boy to the store, but my mobile rings at 8am Saturday morning - my husband tells me I have half an hour to get dressed so we can leave. Oh dear, what has he got planned for me now? It was worth getting up at the crack of dawn though (Friday morning we were up at 5:30, so I guess 8am technically was a lie-in) as we went to the cinema for the first time since watching Harry Potter and the Goblet of Fire before Boy was born. We saw Superman Returns first. I thought it was pretty good considering it had pretty high standards to live up to (I heart Christopher Reeve). I didn't much care for Kate Bosworth as Lois Lane, but I really liked Kevin Spacey. And of course Brandon Routh was not bad to look at! The cheesy bits were my favourite - when he rips open his shirt to reveal the Superman logo and when Perry White and Lois Lane say 'it's a bird/it's a plane' 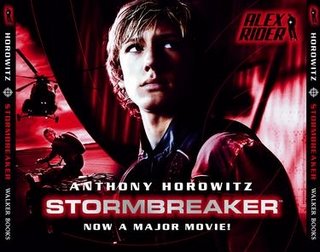 And oh, we had to see Stormbreaker. I'd gone on about it so much over the last few weeks, my husband HAD to come see it with me (and I know he really didn't want to). I didn't hate it. I know that movies have to be different from the books, but I wish this movie in particular hadn't been changed to be aimed at the very young, but at least the comic violent scenes were done well. The fight in the scrapyard was the best, I laughed sooooo much. I don't know, there was just something about it that left me a little disappointed.
Let me just say, cinemas suck in this country. No, maybe not cinemas maybe there's just too many idiot people. I was going to write 'idiot children' but it's the adults as well. During both films we had to put up with yappy children - some of them accompanied by their parents who allowed them to disturb everyone else with their babbling. They should all be burned alive.
Written by Michelle Fluttering Butterflies at 19:37