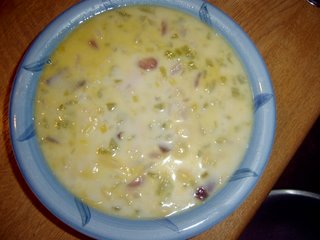 So every weekend, we go food shopping and beforehand we make up a list of dinners to cook throughout the week. My husband generally does Saturdays and Sundays and sometimes Mondays, and I handle the rest of the week. Last weekend, he told me to just pick out anything for him to make and I did. He and I have fairly different food choices. So I don't think he was too keen when I told him one of the choices was a soup with 'poncey' vegetables (leek and celery). In the end, we were so busy over the weekend and then Elliot wasn't well, that he never got to make it. He's been having the same leftover stew for the whole week (and is quite happy) so I thought I'd make soup for one tonight. It came out really well, and I'm very pleased. It was my first attempt at making soup, and even though in the picture it looks a little mank, it really did taste nice. I will make soup again. This is my yummy butter bean and bacon soup!
Written by Michelle Fluttering Butterflies at 21:37