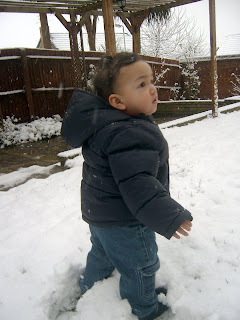 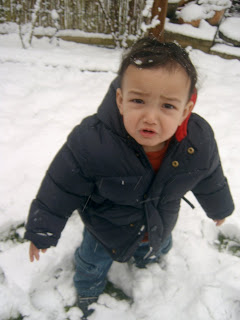 I promised a week of memes, so here we are, but first: SNOW! Yesterday we heard on the news that there would be cold weather during the night and the threat of 10 inches of snow, and it happened! (Though I wouldn't say it was 10 inches of snow in our neighbourhood) and I love snow, so I dragged Baby Boy out into the back garden first thing this morning. I can tell you now, snow is not something that will soon be added to the list of things Elliot loves! He hated the snow, oh well.
This is my first ever Thursday Thirteen - it could well be my last, we shall see!
1. Elliot LOVES to play peekaboo! (don't all children?) Once the game begins, it could last for hours. This is one of the few activities where my little Boy doesn't have a short-attention span!
2. Elliot LOVES anything gadgety. Remote controls especially, once spotted, HE MUST HAVE IT! The camera is another favourite, as well as mobile phones. It should have its own listing, so...
3. Talking on my mobile once it's on speaker phone. He loves mobile phones so much, as I've mentioned before, Elliot must be the youngest child ever to have his own!
4. Giving sloppy, wet kisses. He's such an affectionate little boy! All day long he'll run from whereever he is to whereever I am, to give me a hug or a overly spitty kiss! I love it!
5. Playing the piano! We have the piano in our dining room, and a few times a day, he'll point at the piano and do his cute whining noise until I give in and lift Elliot onto the piano stool so he can bash on the keys. Actually, he's quite musical, he also has a little drum that's one of his favourite toys.
6. Chasing games. There's nothing better than being chased! He'll run around corners, in circles, sometimes he'll run around backwards to get away! If he can't go fast enough, he'll revert back to crawling.
7. Food! Notice I didn't write that he loves 'his' food - he loves everyone's food. Once he's finished with his meal, he'll try to move onto Mommy's and Daddy's food. If he doesn't get what he wants, he'll make his whining noise! He's never disliked anything I've made for him lately and for that I'm very thankful!
8. His bear, Jean-Baptiste. We'd given Elliot bears and cuddly toys before, but he was never attached to any of them. Jean-Baptiste was a present from Father Christmas, and Elliot loves the little guy. If we say to Elliot 'go get Jean-Baptiste! Where's Jean-Baptiste?' Elliot will run off and bring back the bear! Next we'll be teaching Elliot circus tricks!
9. Dance! He does have a favourite song ('Hips Don't Lie' by Shakira) and never fails to bounce and sway to that, but he also twirls along to his favourite TV theme songs ('Wonder Years' mostly) and does a sort of baby-robot moves to other music playing! It's brilliant to watch!
10. Climbing on the sofas! I've been dreading the day where Elliot learnt to climb up things, and that day is here. He doesn't seem to have any fear at all, it's me that has a mini-heart attack when I see him teetering on the edge of the couch armrest, struggling to reach for the remote controls on the TV. Once, I gave him his bottle of milk and went into the kitchen for a minute, and when I came back in, Elliot had climbed on the sofa and sat cutely in the corner watching TV. I could have melted!
11. Corners! What is it about Elliot and corners? Is this a normal baby thing? Because Elliot adores squashing himself into any corner in the house! And heaven help you if you sit in HIS corner!
12. Books! I love that Elliot loves books. He can't get enough of them. He brings his favourite stories (Each Peach Pear Plum, The Gruffalo, The Very Hungry Caterpillar) to me to read to him a few times a day, and quite a few of his books (Guess How Much I Love you amongst many) have had to be retired because SOMEONE ripped the front and back covers off. Oops.
13. His mommy! I couldn't make this list without mentioning how much Elliot loves his mommy. And if we're entirely truthful, the heirarchy of who Elliot loves the most would look like this:
The most: Grandma
Above Average: Daddy
I quite like: Mommy
Oh well, at least I feature on the list, I could well be bumped off this list in the near future by Jean-Baptiste. I don't look forward to it!
Written by Michelle Fluttering Butterflies at 09:43