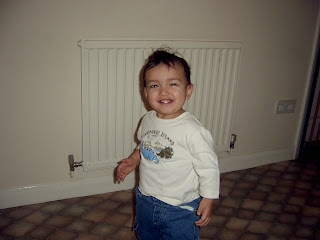 It's hard to deny it any longer, I don't have a baby boy anymore.. I have a little toddler. It's kind of scary actually. When Elliot was a baby, he was pretty easy. Not fussy, didn't cry much, was easy-going about pretty much everything. I didn't want him to grow up - he's so sweet and innocent at the moment. But I can feel it all changing, slowly but gradually. He learned how to climb onto the sofas the other day so he could play with all of the items we'd tried to keep out of his reach, like the remote controls. He's down to one nap in the early afternoons, and apart from this, it's all-play all the time. If he sees me eating or drinking something different to him, Elliot will start whining. If things are out of reach, he'll cry, and sometimes he'll manage to get what he wants. We were playing on the floor the other day, and he pushed me from behind, put his whole weight into it. Later that day, he bit me. I wouldn't say he's naughty, but he's into everything and he's so demanding. When I tell him no, sometimes he laughs at me. Other times, he'll start throwing his toys. It's a whole different picture from Elliot as a baby, and I know I'm going to find it difficult to adjust to. I've never had experience with children before Elliot came along, I don't know what's normal, someone please reassure me. On the advice of my health visitor, I've picked up 'Toddler Taming' from the library, but I don't get a chance to read it except at night, when I'm tired. I've only managed the first two chapters, where the author has brought up the issue of the importance of confidence in your role as parent. And I am floundering on this very point! Help!
Written by Michelle Fluttering Butterflies at 16:39