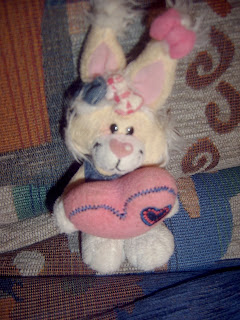 (Welcome to this week's edition of Meet the Guys Monday, today we have Mimi. Say hello to Mimi!)
Two years ago, N went on a business trip to Sweden (or was it Denmark?). It was unfortunate timing, as I found out I was pregnant whilst he was away, and I really wanted to tell him face-to-face. When he came back, and I was ready to tell him - N knew already. I couldn't believe it! Anyway, he brought back gifts, and there was a TON of presents. I was opening them in the living room, surrounded by The Guys and I didn't even realise I was thinking it, until I asked 'And did you bring anything back for The Guys?' He thought for a second, and said 'yes' He then pulled out this gorgeous creature with that beautiful, big heart. She's technically a keychain, but since N brought her home, she's been the cutest and smallest member of The Guys. She was already given the name Mimi, and in fact on her left paw it says 'Mimihopps' though we sometimes call her 'The Hopster' or just 'Hopps'

Elliot loves to play with Mimi. I don't know how he always manages to single Mimi out, but he does. And he's going through a phase of putting things into containers and so on. A few weeks ago we almost had a disastrous incident, where Elliot put Meems in the wastebin and she was almost thrown away!
Written by Michelle Fluttering Butterflies at 11:57