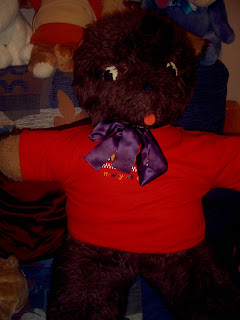 This will have to be quick today because I missed out on when I usually write my blog entries (when Elliot's taking his nap) and now I only have a limited time on my laptop until Elliot want to come play with the mouse or keyboard (we've set up a wiresless mouse and keyboard so I don't have to cramp my fingers using the laptop's).

Today's Meet the Guys Monday is dedicated to Jack! Everyone say hello to Jack. He's the largest of our guys and the oldest. N and his sister were both given bears, one large and one small. N got the small one, his sister got the large one. Each wanted the other, so they swapped (at least I think so) And so this adorable large bear lived on the N's parent's couch for 20 odd years until the arrival of a cute, charming American girl who swept in and decided that this large bear MUST not go another day without a name.

N and I do have a tendency to name our Guys after television/movie characters and you must be thinking 'Jack from 24? Jack from Lost?' Oh no, his name predates them both.. Jack is Jack simply because we liked the name and it seemed to fit him. Back when we were still living with my in-laws, I used to fall asleep cuddled with Jack. He originally had a sad little red ribbon around his neck. It just looked too pitiful, so we replaced it with a more vibrant purple ribbon. When we went to New York two years, ago, we brought back a children's t-shirt especially for our special Jack! Isn't he gorgeous? Don't you just want to give him a hug?
Written by Michelle Fluttering Butterflies at 13:39