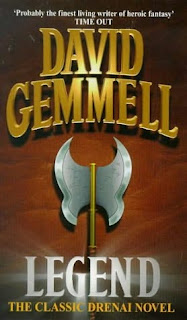 The Legend Druss, Captain of the Axe: the stories of his life were told everywhere. Instead of the wealth and fame he could have claimed, he had chosen a mountain lair, high in the lonely country bordering on the clouds. There the grizzled old warrior kept company with snow leopards and awaited his old enemy death.
The Fortress Mighty Dros Delnoch, protected by six outer walls, the only route by which an army could pass through the mountains. It was the stronghold of the Drenai empire. And now it was the last battleground, for all else had fallen before the Nadir hordes.
And hope rested on the skills of that one old man...

This is the book that made me really decide that I must buy the book, 1001 Books To Read Before You Die. I say that because I really want to know the logic behind putting Legend on the list. Don't get me wrong, I thoroughly enjoyed it. I couldn't put it down in fact. Apart from a slight annoyance that happened at the end of the book, I thought it was constructed well, I liked all of the characters. I liked the planning of the battle, the battle itself. I thought it showed men's courage during war, why people continue to fight even though the odds are stacked hugely against them. And maybe I'm prejudiced against fantasy books in some way that I didn't realise before, but when I finished it I seriously did wonder 'why is this on the list?' Somebody tell me, please. Go out and read it if you haven't already, you'll like it. Then come back and tell me what you thought.
Written by Michelle Fluttering Butterflies at 11:31