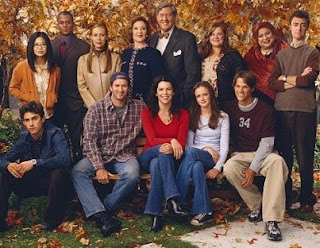 Over the last few months, I've been watching the Gilmore Girls from the beginning on E4. I completely missed it when it was on originally and didn't know anything about it before I started watching it except 'oh my god, it's so good, you have to watch it!' And so I did. It was the last show of season 2 on this morning. (Milo Ventimiglia!)

And I shouldn't like it, really. The dialogue is just too snappy, I don't feel as if it's natural. It feels more like they all learned their lines really well and are a bit over-eager to say them. The acting is a little over the top (Paris all the time and Dean and Luke when they're angry) It's a bit predictable and Rory and Lorelai are just too sappy about each other. I don't like gooey relationships between mother and daughter because I don't feel, personally, that it's realistic.

But the characters are all likeable enough, I find all of the cultural references amusing and even though I have so many complaints about the show, I CAN'T STOP WATCHING IT. I'm not sure if it's the actual show that I like or that I'm clinging to it because it's on everyday and I need something to watch.

Did you watch Gilmore Girls when it was on? What did you think?
Written by Michelle Fluttering Butterflies at 13:48