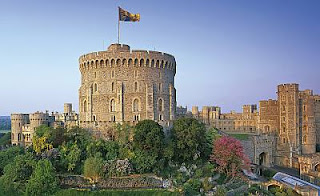 Do you believe in ghosts? Would you be willing to spend the night in a haunted house?*

I neither believe or not believe in ghosts. But ghost stories creep me out. My brother used to try to tell them to me to see my reactions and they'd give me nightmares. Scary movies do the same thing. I'm such a little girl about these things, but I'm still attracted to them. I like a good ghost story now and then. I like being scared sometimes. Atmosphere is key. The last time I watched Poltergeist it was a windy night, black as anything, no one in my creepy house but me and my blanket. I can't think about the movie without shuddering. And this is the season for scary things.

I love Halloween, but it's not as widely celebrated here in England as it is in America. I love the dressing up and the decorations and the trick-or-treaters. Sadly, last year, no one knocked on our door. But this year will be different. Because we're going to have to make our own fun. Which is why I was so excited when N found a pumpkin patch for us to visit and the boys have the cutest outfits this year (can't wait to share the photos) and we'll be watching some horror film... but I thought today I might share a little something different...

I love that there is so much history in England. And one particular historical landmark nearby, which I have never visited but should, is Windsor Castle. It's the largest and oldest occupied castle in the world. And, this is the best bit, it's haunted! Listen to this:

One of the most famous ghosts reported at the Castle is that of King Henry VIII. Guests staying at the castle have reported hearing the king's footsteps along the long hallways of the Castle. Some have even claimed to hear moans and groans coming from the hallway. One of his wives, Anne Boleyn, has been seen standing at the window in the Dean's Cloister.

Queen Elizabeth I haunt the Royal Library and is said to have been seen by several members of the Royal family. The sounds of her high heels are heard on bare floorboards, before her imposing figure appears and passes through the library and into an inner room. She has also been seen standing at the window in the Dean's Cloister. She is always dressed in a black gown with a black lace shawl draped over her shoulders.

There is a demonic horned being said to bring death and disease to those who are unfortunate enough to see it, especially the Royal family. Other legends tell of witchcraft and suicide.

There's loads more, if you click on the link. I wish Windsor Castle would do something to play on the ghostly aspect and do some event, but I'd still like to visit. So how about you? Do you believe in ghosts? Would you stay in a haunted inn? Do you like ghost stories? Do you get creeped out by them?

*taken from my all time favourite book, The Book Of Questions by Gregory Stock

The video below is of the Fright Night mazes at Thorpe Park. It sounds amazing. I'm not sure I'd have the guts! Would you?

Written by Michelle Fluttering Butterflies at 11:55