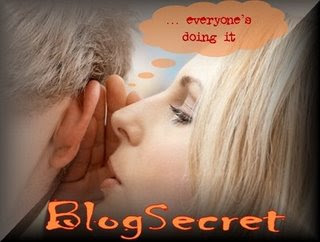 The day has arrived! I have recieved the anonymous blog post and am very excited to read other people's secrets and the reactions to those secrets. I'm feeling nervous about my own secret that I've unleashed somewhere within the blogging community. I'm wondering constantly if everyone will just KNOW which one is mine, I'm paranoid that someone might go looking for it, I'm worried that people will react in a different, less positive way than I'd like. I'm just worried.

Before I get to my guest post, please do visit Nilsa over at SoMi, who has done a fantastic job at organising this great event and tell her a big thank you if you've enjoyed this whole experience. I know I have. She wrote in an email about sharing secrets being cathartic and liberating and I couldn't agree more. It must also be nice to know that other people out there might be going through or have gone through similar situations, thoughts or feelings. So now, for you all, here is the secret I have been chosen to share:

I am a keeper of secrets.

My boyfriend knows a lot of my secrets. Things that I haven't told anyone else. But... quite honestly, there are a few things that I don't know if I can EVER share with anyone.

When I was thinking of what to write for my submission, I had a million ideas. Most of them were humorous, but as you will soon see, I chose the most serious topic of all.

I'm sharing a secret that I never thought I would share with ANYONE.

I'm sharing a secret with you that I can't even share with a therapist. With people that I know are safe. Because I have a hard time sharing it with myself.

Okay, here goes, as I keep reminding myself that this is anonymous.

My sister is a lesbian. Don't get me wrong: I am very liberal, and am not one to be ashamed of ANYONE who has not taken the straight way. Rather than opposite, actually. The thing is... She wasn't always.

She liked boys. Until she was sexually abused.

And I'm the only one who knows.

I'm the only person in the world that knows about her abuse. I don't know if she realizes that I remember her telling me about it when I was young (she's older than me), and it's not something we talk about, even though we are incredibly close in all other ways. I think that SHE has talked to others about it.

I know people will comment and say, "YOU SHOULD TELL SOMEONE. YOU OWE THAT TO YOUR SISTER AND SO MANY OTHER PEOPLE OUT THERE. YOU OWE IT TO HER, but it also represents something bigger than your situation."

It's not that easy, though. I'm sad to think about it. And I'm sad to share this secret with everyone.

It just shows that you never know what people are carrying around with them, and what has influenced who they have become.

I love you all!
Written by Michelle Fluttering Butterflies at 00:01