One from my honeymoon... 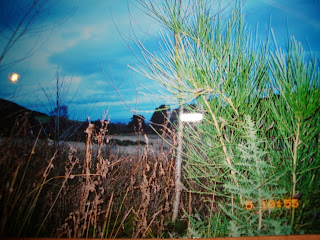 N and I were married many years ago. When I moved to this country, the restrictions of my visa were that we were to marry within 6 months. I wasn't able to work during that time and I wasn't able to leave the country for a further year.

It was a bit of a struggle planning the wedding from a different country and things were mostly left to N to sort out as there just wasn't time as it was just over three months between me flying into England and us getting married. So N hired the reception hall, booked the church and took care of the food. I did bridesmaid dresses and flowers when I arrived. We did manage the photographer and the videographer together. And then there was the honeymoon.

I did dream of Europe or somewhere farther afield for our honeymoon. But it wasn't to be. We were stuck in this country. We decided on the Moray Firth region of Scotland to honeymoon. It was the stories of bottlenose dolphins that brought us up there. Excited, we booked a country cottage named 'Dolphin Lodge.'

But of course, we married in December and it was too cold for dolphin sightings. So disappointing! We had fun anyway, taking long road trips into the middle of nowhere, stopping off at roadside shops to pick up quirky little things we wouldn't find anywhere else, enjoying other ..ahem, honeymoon activities. There was a farm near where we stayed and I remembered there were two ponies that had a little horse 'fight' when we drove by and we stopped to watch as they reared up at each other. I have great memories of our Scottish holiday. Wouldn't change it for anything.

Where do you go or where would you like to go on your honeymoon?

Written by Michelle Fluttering Butterflies at 06:57