Read Aloud Thursday is something I've been meaning to participate in for weeks. I keep leaving the titles of the books we've read aloud in the comments over at Hope Is the Word. This week, no excuses. Here's what we've been reading this week.

Elliot's bedtime routine includes reading four books. This number is flexible but it never goes below four. Last week it was all about the free Thomas the Tank Engine books that came free with the (terrible) paper, but we've been trying to wean him off them. 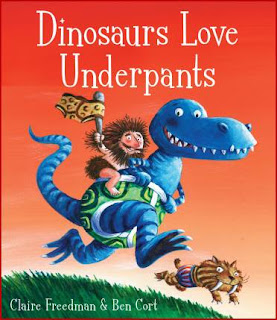 Dinosaurs Love Underpants by Claire Freedman and Ben Cort. Elliot went through a phase of liking dinosaurs. Now he thinks they're scary and says 'I don't like die-shoe-aurs' but this book makes him giggle instead of be afraid, so it's still allowed. This book explains the mystery of how the dinosaurs became instinct. Elliot likes the illustrations as well as the rhyming text. 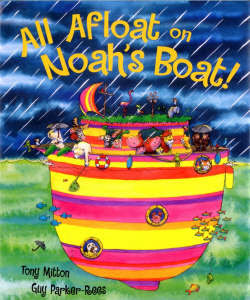 All Afloat on Noah's Boat by Tony Mitton and Guy Parker-Rees. On Noah's ark, the animals are all getting a little testy and impatient with one another, so Noah decides to put on a talent-show, but one pair of animals is feeling a little left out... 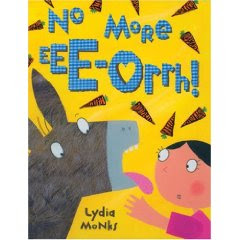 No More Eee-orrh! by Lydia Monks. This is possibly my favourite picture book of Elliot's. I'm a fan of donkeys anyway, but in this Lydia Monks has taken real photos of donkey fur (fur?) and used it alongside cartoon illustrations in this tale (tail!) about a noisy donkey and his neighbours. 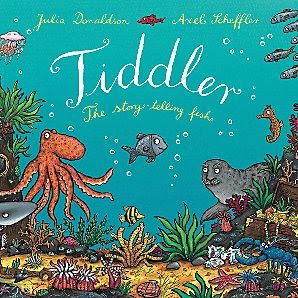 Tiddler by Julia Donaldson and Axel Scheffler. Who doesn't love Julia Donaldson? Elliot adores all of her stories. Especially when she teams up with Axel Scheffler. His favourite part of Tiddler? Pointing out the 'Gruffalo fish' and yelling 'Tiddler? Tiddler? Tiddler's LATE!' The rhyming repitition of this book which makes it all a bit sing-songy really appeals to my three year old.
Written by Michelle Fluttering Butterflies at 06:51