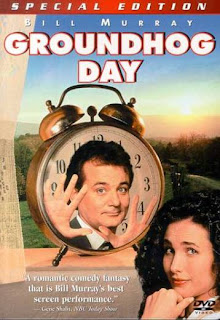 You've all seen that film, Groundhog Day, right? Where Bill Murray is stuck in some small little town reliving the same day over and over again. And his first few days he spends punching people and robbing a bank and killing himself. And then he starts making friends and learning new things and he can play the piano and ice sculpt and he saves people's lives and then he ends up with Andie McDowell? Well, I feel a bit like early-Bill-Murray in Groundhog Day.

I'm stuck in a rut. I wake up everyday and I feel like I'm doing the same things over and over again. Maybe that's the same for you? Do you ever get tired of doing the same things, thinking the same things? I do. I get up, and I cook and I clean and I entertain my boys. I pick up the same toys and put them away, I read the same books to Oldest, I sweep the same bits of food off the floor under Littlest' high chair. I take the same trip to and from Oldest' pre-school. On Tuesdays I go to toddler group in the morning, Friday afternoons Oldest goes shopping with N. When Oldest is at pre-school and Littlest is asleep, I either use the computer or read my book and think about all the things that I should be doing or all the things that I could have done that morning but didn't do.

Things will change, because I'm going to doing things differently. I've made a promise to myself that for the month of April, at least, I will do something different every single day. It's not going to be life-changing or anything, they'll all be quite minor things. I really want to focus on going to new places, on learning new things, doing fun and interactive things with my boys and being less afraid. I've already made a list of proposed new things to do, and I'll do these things and then I'll blog about them.

Maybe you want to join me in this? Or maybe your thing will be to just sit back and watch or be my cheerleader and leave lots of encouraging messages. Whatever, I'm just happy that I'll be doing this. I don't think by the end of April I'll be able to ice sculpt or play the piano, and I certainly won't end up with the girl, but maybe I'll end up having an adventure, maybe the boys will have an amazing month and I'll be out of this rut and I'll have impressed you all with astounding knowledge of ... something. Who knows? I'm going to find out. Are you with me?

Also, a book that partially inspired the project - Looking For Alaska by John Green and
A bump in the road
Written by Michelle Fluttering Butterflies at 06:58