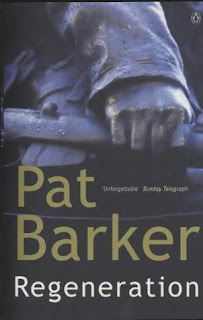 Pat Barker has melted fact with fiction in Regeneration, the first book in a trilogy about World War I, as she combines historial events and figures such as Wilfred Owen, Siegfried Sassoon and the psychiatrist that treated them during their stay in a psychiatric hospital. Dr Rivers uses a new technique, psychoanalysis, to 'cure' soldiers of their traumatic experiences during their war and prepare them to return to the front.

Regeneration by Pat Barker is just one of those books for me. I read it and it wasn't enough. I wanted to know more. About World War I, the poetry that was written during and about the war, the lives of Siegfried Sassoon and Wilfred Owen, the psychology. It really inspired me to just find out more.

It is not an easy book to read. I found it quite grim in parts, and Barker really didn't shy away from the atrocities, both physical and psychological, that these men faced during the war. But of course it goes beyond that as well and looks at how class and gender factored into the treatment the soldiers were recieving as well as the morality of both war and the rehabilitation of the wounded.

This book really appealed to me on all levels. Well-written, thought-provoking, moving. Highly recommended to all.
Written by Michelle Fluttering Butterflies at 06:43