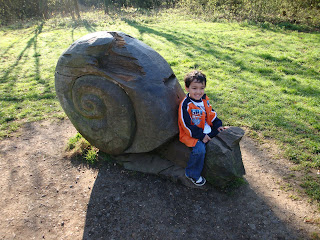 Today is the first day of my month long project to Do Things Differently. I wanted to ease myself into the project, so I've stayed a little within my comfort zone for today. I took the boys to Dinton Pastures, a local park that features lakes, rivers, woodland and ducks and things. There's a few different nature trails you can choose and I let Oldest take control, both of the direction we were headed in as well as setting the pace. We stopped when he wanted, we moved on when he decided. It was really nice to slow down, take things as they come and not be so impatient to get somewhere or finish something. 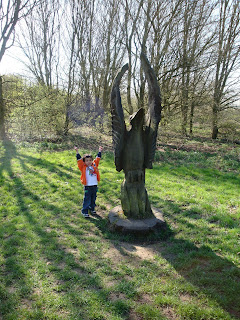 It really is a beautiful park to go to and wander around in. I've been meaning to take the boys during the week for ages. I have this daydream in my head of the three of us (and if I'm honest, a dog) strolling around the lake first thing in the morning. It would be so lovely to wake up to the views at Dinton Pastures. This little daydream of mine is why I've included a trip to Dinton Pastures in my project. I'm really hoping that our trips to Dinton become a more regular feature into our routine. 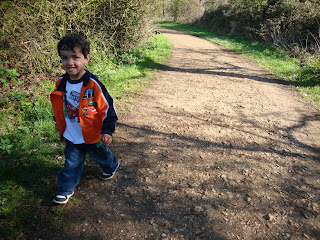 Oldest isn't 100% better following a stomach bug over the weekend, so I also thought some fresh air would do him good. He seemed happy enough to run around a bit. We didn't see many ducks or swans like we normally see, but Oldest enjoyed picking up twigs and stones and he filled up Littlest' pushchair basket with them. 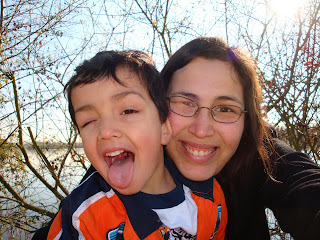 I was surprised that there weren't as many people there when we went. It was a beautiful day, perfect for taking a nice leisurely walk around the lake. Everyone we saw smiled and said 'good morning' to us. Oldest wouldn't say anything until after the people had passed us and then shout 'That was a big dog, wasn't it, Mommy?' and I heard more than a few people laugh. I asked Oldest if he'd like a dog sometime, and he said yes, he would. What colour dog would you like? RED, he says. After I told him it might be difficult to find him a red dog he said, 'that's OK, Mommy, I'd also like a black dog' That might be an easier wish to grant, my child... 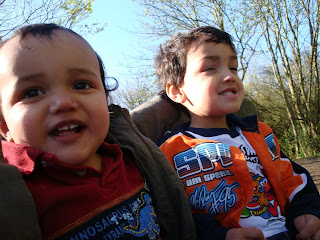 Part of the reason that I'm doing this project is to be more present when I'm spending time with Oldest and Littlest. And I found myself loving this peaceful conversation that I had with Oldest. He is such a fun little boy to be around. He's seemed to have gotten over his camera-shy phase and now he's into this wonderful playful stage with taking photographs. He's always winking or sticking out his tongue, throwing his arms out wide, or something just SILLY. 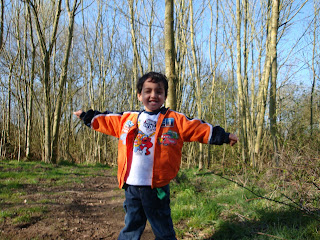 He's just fantastic. It was a great morning. We're off to a good start. Without this challenge, I might not have left the house, Oldest might have watched cartoons, I might have tried to finish more housework instead of spend time with the boys, Oldest and I would never have had the conversation about the red dog and I wouldn't have been able to hear Oldest call the park 'Dinton Passengers' And that would have been a shame.
Written by Michelle Fluttering Butterflies at 07:08