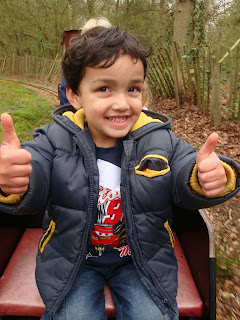 Despite my depression post of last week, I am still taking part in this project. I'm just not pressuring myself to post my results in a timely fashion anymore and I'm not posting about every single day. Just the fun stuff. For this, Day 9, I decided to check out Wellington Country Park. I didn't know very much about it before we went. Just that they had a circus act for the children Easter weekend and that the park was somewhere on the route that I take to get to my university tutorials in Basingstoke. To step things up just a little bit, I decided to invite a friend and her daughter along. This is something I never do. I chickened out just a little bit and emailed her, but whatever. She came. It was great to catch up with her. 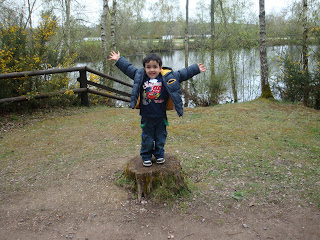 We arrived just as the circus show was starting. I'm sorry now that I didn't take any photos, but seating was limited and I ended up sitting away from Oldest with Littlest in my lap. Littlest was a bit restless and I had my hands full. When we got outside, he was much happier, and so was I. 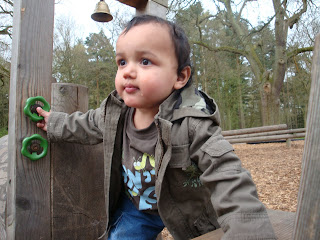 There was so much to do! Apart from having a beautiful lake and well-kept grounds on which to run around, there were a load of little play areas along the path - a tractor to sit on, climbing equipment, a massive tyre, sand pits, slides, and Oldest's favourite - a train. 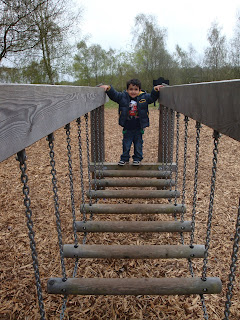 It really was a wonderful day. To think all of this is only a short drive from where I live.Oldest asked to come back the next day. There was face painting in the lobby as well as pottery painting. But it was the hills that he loved the most. He loved climbing them and running down the other side. It was fun to watch him giggle and trip his way down. Fun was had by all, and just maybe I'll be less afraid to give a friend a call from now on, make a day of it with us and the children. Somewhere local and outdoors. Why not? 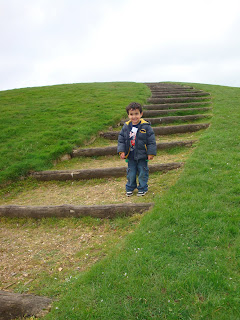 Doing Things Differently in the month of April
Written by Michelle Fluttering Butterflies at 07:15