More of the boys..

I know it's been a bit heavy on the posts involving the boys lately, but you'll have to put up with one more today, especially as I have been doing zero reading lately. I did, however, go to the library today so things are looking up. But first, here are two photos that were taken at a birthday party last weekend. 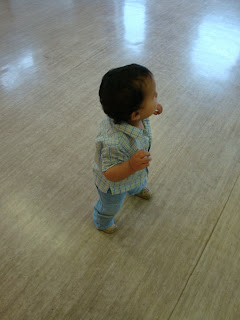 It's not a great photo, but look at Littlest standing so confidently. He'll be walking soon. I've been saying that for about 4 weeks, but he will. It will be soon. I have mixed feelings about it all. Obviously, it's a good thing for him, it'll be a lot less strain on my back from not lugging him around anymore, but it's also his baby days gone. Oh I will miss the cuddly baby days. 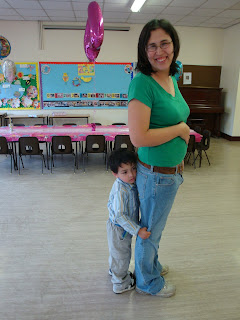 Here's Oldest. I hate to see him like this. He's usually so sure of himself and not shy with strangers, but only with some preparation. He likes to be told things in advance so he knows what to expect. For some reason, that didn't happen this day. The birthday party was sort of sprung on him at the last minute and here's Oldest indulging in a little hiding-behind-Mama's-legs. He's never been what you'd call a Mama's Boy, but he's been turning into one lately. AND he's taken to actually calling me 'Mama' which makes my heart melt just a little bit each time I hear it.
Written by Michelle Fluttering Butterflies at 21:48