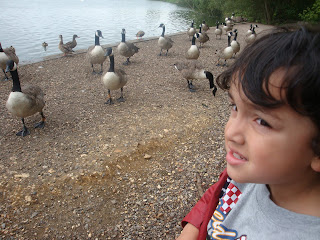 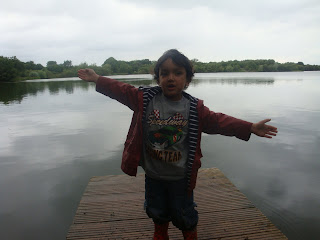 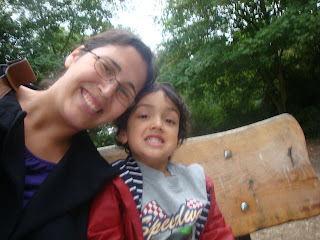 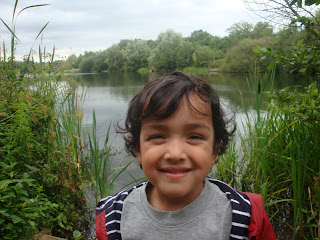 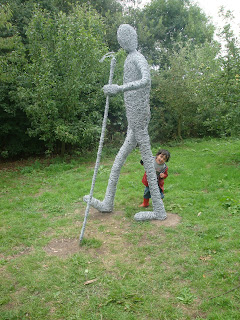 On Wednesdays, my mother in law looks after Littlest during the day. She gets to spend some one-on-one time with Littlest, and I get to have a special day just Oldest and I. On Fridays, it's the other way around. Me with LIttlest, her with Oldest.

Last week, for our special Wednesday treat, Oldest and I went to a local shopping centre and had our own little lunch date and looked at Thomas trains. This week, we went to the library (for Thomas books) and then went on a summer treasure hunt that one of our favourite local parks was hosting.

It was such fun. I wasn't sure about going because it had been raining quite a bit the previous day, during the night and early morning. But it was dry when we set out. Oldest loved jumping in the puddles anyway. We ran around the park, answering a bunch of questions, taking silly photos. Oldest is such a character. That first photo? With the geese? As that photo was being taken Oldest whispered to me - 'mommy? ducks don't eat people, do they?'

Love, love, love spending time with Oldest. He's growing up so quickly, becoming so much more independent. I want to hold onto him and never let him go. I have planned some (hopefully) special things with him over the next few weeks.
Written by Michelle Fluttering Butterflies at 15:35

Email ThisBlogThis!Share to TwitterShare to FacebookShare to Pinterest
Labels: I'm having a heartattack just thinking about how quickly you're growing up