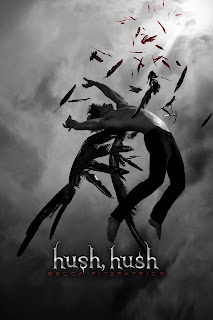 For Nora Grey, romance was not part of the plan. She's never been particularly attracted to the boys at her school, no matter how much her best friend, Vee, pushes them at her. Not until Patch came along.

With his easy smile and eyes that seem to see inside her, Nora is drawn to him against her better judgment.

But after a series of terrifying encounters, Nora's not sure who to trust. Patch seems to be everywhere she is, and to know more about her than her closest friends. She can't decide whether she should fall into his arms or run and hide. And when she tries to seek some answers, she finds herself near a truth that is way more unsettling than anything Patch makes her feel.

For Nora is right in the middle of an ancient battle between the immortal and those that have fallen - and, when it comes to choosing sides, the wrong choice will cost her life.

Oh, I really wanted to love this book more than I did. It's the cover, so beautiful. But I didn't love this book. It was very readable, but I had a lot of problems. I do love the idea of it. Fallen angels and whatnot. It's an interesting angle. It's no secret to the reader who the fallen angel is though, but the main character, does not found out until well into the book, which makes the storyline drag. Nora, herself, was kind of a boring character though I did enjoy some of her inner dialogues. Responsible, studious. I wish there were more strong female characters who have other interests and hobbies. A more rounded and believable person. Also, I found her best friend, Vee, to be a little tedious with all her chatter about boys. I don't know. Vee didn't work for me because I don't know anyone like her. Maybe you do.

However, I did like all of the action, especially the scenes at the fairground. More books should involve roller coasters. Also, Patch? Entirely creepy. I get that he's rocking the whole 'bad boy' image, but to be honest? I was never one to fall for the bad boy. I can see how some people might go for him, he does seem to circle around trouble and he is apparently good-looking. Nora finds herself doing things she wouldn't normally do around Patch, she finds herself wondering if Patch is behind these mysterious attacks on her during the book, possibly Patch is following/stalking her, etc. The possibility of him being a stalker/out to kill Nora causes me to not see the sex appeal of Patch. Which leads me to the unbelievable sacrifices that occur in this intense relationship which seems to be grounded on nothing. So yes, I did have my problems with this book, but like I said, I was able to read it very quickly, and none of the problems that I've mentioned compelled me enough to put this book down and walk away.

Maybe I'm just disappointed because of all the hype gave me very high expectations. I've heard such good things about this book, but for me, it didn't live up to it all. Which is a shame, because I truly adore a YA with a good paranormal romance. Having said that, I'll probably still read the sequel.

Written by Michelle Fluttering Butterflies at 07:27