I need a bit of variety..

I decided that even though I had a bunch of books from the library already, I needed some more variety. Here are the books I picked up: 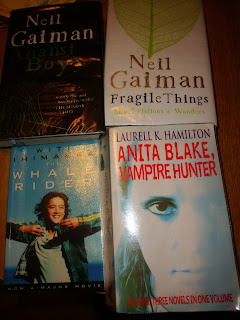 1. Can't really see from that horrible photo, but it's Anansi Boys by Neil Gaiman. I read American Gods earlier this year and I've been kind of desperate to read this one ever since..

2. Also, Fragile Things by Neil Gaiman. I'm not the biggest fan of short stories, but I can't go wrong with more Neil Gaiman!

3. Whale Rider by Witi Himaera - I saw the movie a few years back and it was quite sweet, so the book must be better, right?

4. Anita Blake, Vampire Hunter by Laurell K. Hamilton - which is the first three books in the Anita Blake series. Just the other day I was saying to someone about how I wouldn't start a series which has so many books already in it, and here I am starting a really long series. Currently? 17 books? What am I thinking? (so far, I've read Guilty Pleasures and while I enjoyed it, I'm not dying to read the others just yet) 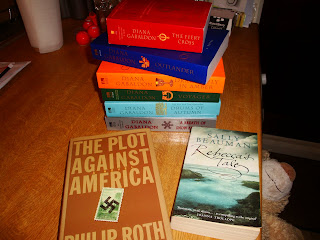 And then we have this interesting collection of books. It's a bit difficult to see, but that stack of books at the back is the first 6 books in the Outlander series by Diana Gabaldon which I won in a giveaway. I can hardly believe it. Thank you to Michele at A Reader's Respite for these. It will definately keep me busy for a long, long time and it was a very generous giveaway!

And also, because it appears that I cannot pass a charity shop without buying books, we have The Plot Against America by Philip Roth and Rebecca's Tale by Sally Beauman. (which were BOGOF!)

What do you think about starting books in a long series? Put off by it or excited that there's more to read?
Written by Michelle Fluttering Butterflies at 08:30