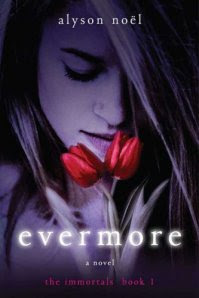 I hadn't planned on reading this one, but then I read Raych's review over at books i done read (link below) and I was laughing so much throughout that when I saw the book at the library I thought 'why not?' and gave it a chance. Oh dearie me. It was .. interesting.

There are so many supernatural romances out there at the moment, and I have to admit, I've been enjoying reading them. But Evermore really grated on me. There is much that I disliked about the book. The premise is interesting.. Ever survives a car accident that kills her parents and little sister. From that moment on, she's able to hear thoughts and see people's auras. She goes to live with her aunt in California, and takes up with the misfit crowd while carrying on conversations with her sister's ghost. Then one day she meets Damen and things get a bit weird.

The parts I didn't like? The dialogue. Especially out of the mouths of Ever's 'friends' Haven and Miles. I put friends in quotations there because that bond of friendship didn't seem particularly strong, especially in Haven's case. Doesn't take a lot to get these friends riled up at each other. Haven and Miles seemed to be a bit two-dimensional as well.

Hated Damen. Throughout the book. He has very few redeeming features. He may be good-looking, but if you're a douche, as Damen appears to be, then that fact doesn't go very far with me. He's clearly messing with Ever, being very mysterious, not answering or addressing any of her concerns, blatantly flirting with the one person who is bullying Ever, and playing tricks with her mind. No. The fact that Ever and Damen are mysteriously pulled to each other? Not particularly believeable, especially considering all the crap that Damen pulls. Plus, what was with all the skipping school? That's not cool! I didn't much care for how slow Ever seems to be. She seems to be the most non-inquisitive person ever. Even when she sees Damen move faster than is physically possible, she still never asks any questions, doesn't demand any answers. Just thinks to herself idly, 'hmm, that was odd.'

I also didn't like the ending. The big reveal seemed to be too much, all at once. I couldn't really wrap my head around where everything was going and after the dragginess of the first 200 pages when not much seemed to happen, when everything did happen it was just confusing. But, it's not all bad, otherwise I'd have stopped reading.

I did think that Ever's grief over the loss of her parents was well done. I believed in that pain and the guilt that she carried around. I also like Riley, Ever's little sister. She was annoying but fun and I did enjoy it when Riley was around.

I wish there was more regarding people's auras because that seemed kind of cool. I'd have liked to see more development between Ever and her aunt. I wish Ever were a stronger person who took more control over her life. I'd have like to have seen a more believeable romance between Ever and Damen. But these things I think will have to be found in a different book. It's unlikely that I will pick up the others in this series.