I had to really brave the elements to make it to the library this morning. It was -4.5 degrees as I was scraping the ice off my car and the road was really frosty. It even had a light dusting of snow as I was driving. But I'd read all my other library books and a slight desperation had set in. Off we went. And here is what I picked up: 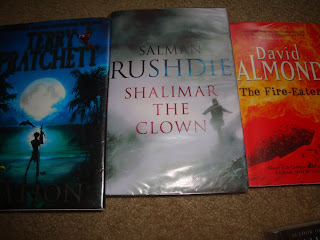 Nation by Terry Pratchett - I was quite excited to pick this one up. In fact, Terry Pratchett excites me at the moment. I read Mort in December and LOVED it.
Shalimar the Clown by Salman Rushdie - I've never read anything by Rushdie before. To be honest, it was the cover that attracted me to this book.
The Fire-Eaters by David Almond - David Almond is quickly becoming one of my favourite children's authors. I've only read Jackdaw Summer (review coming soon) and The Savage, but they've both been wonderful! 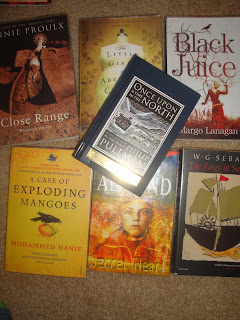 Close Range by Annie Proulx - I'm slowly getting into short stories. The first book finished in 2010 was a collection of short stories and I quite enjoyed it. So I was on a bit of a hunt for short story collections today. Any you'd like to recommend?
The Little Giant of Aberdeen County by Tiffany Baker - I can't remember where I've seen this, but this was picked up by a collective book bloggers' influence.
Black Juice by Margo Lanagan - I'd checked this book of short stories out before but hadn't the time to get to them properly.
A Case of Exploding Mangoes by Mohammed Hanif - I kind of liked the title.
Secret Heart by David Almond - another David Almond! I was going to take out more of his books, but thought I might overdose on them too soon.
The Rings of Saturn by W. G. Sebald - I was vaguely aware of this book possibly being on the 1001 Books To Read Before You Die list and I still have 4 more titles to read to finish the 1% well-read challenge!
Once Upon a Time in the North by Philip Pullman - YAY! I was going to buy this book as my library hadn't had it in since forever, but just as I was going to give up hope, here it is!
Written by Michelle Fluttering Butterflies at 12:15