REVIEW: Inside Out by Maria V. Snyder + Interview with Author 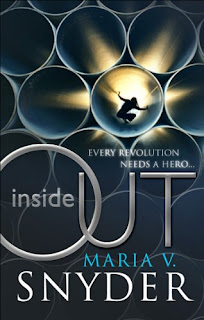 Keep Your Head Down.

I'm Trella. I'm a scrub. A nobody. One of thousands who work the lower levels, keeping Inside clean for the Uppers. I've got one friend, do my job and try to avoid the Pop Cops. So what if I occasionally use the pipes to sneak around the Upper levels? The only neck at risk is my own…until I accidentally start a rebellion and become the go-to girl to lead a revolution.

I absolutely adored Inside Out by Maria V. Snyder. So much so that the night after I'd finished reading the book, I had a dream that I was Trella and I was inside the pipes in the lower levels. I love it when a book invades my subconcious in that way! It was the first of Maria's books that I've read, but I'm sure that it will not be my last. Especially as there will be a sequel to this called Outside In, coming soon.

Trella lives in a world that is divided into two parts - the lower levels and the Uppers. Trella lives in the lower levels, where she's expected to do long and mundane jobs, like cleaning pipes and is constantly on her guard from the Pop Cops who try to watch and rule every second of the scrubs' lives. Trella is a big loner though, and has kept herself mostly isolated from the other scrubs and kept under the radar of the Pop Cops. Instead, she's made it a point to learn every inch of the pipes and the lower levels - even sneaking around the Uppers sometimes too. When her only friend, Cog, takes Trella to hear a new Prophet speak, it sets off a series of events that eventually places Trella in the role of revolutionary as she hunts for the answers about the Uppers, Outside, Trella's parents, and seeking ways in which she can make the lives of the scrubs better.

I really loved the character of Trella. She's put herself into this position of outsider, even amongst those closest to her. She trusts nobody, but as things start to happen and she gets deeper and deeper into this revolution in which she is cast as spokesperson, she really must start relying on other people - other scrubs, and even Uppers. The sort of situation that Trella is in reminded me a little of Katniss Everdeen in The Hunger Games series. Like Katniss, Trella didn't ask to be put in this position, but has the strength of character, the instincts for survival, the knowledge and strength to make things happen. I adore reading a book with such a strong female lead, especially when an outsider like Trella earns the respect and loyalty of the scrubs.

There's quite a lot of action in Inside Out, everything moved at a very quick pace, which I enjoyed. And where the story led, for me anyway, was quite surprising. I was kept on my toes quite a lot, with the manouvering of the Pop Cops and the ways in which Trella and her band of revolutionaries respond. I had so much fun reading this book. It brought up hope quite a lot. And while Trella doesn't always believe in the idea of the Gateway to the Outside, she does at least always try for the sake of the other scrubs who have more faith than her. There's also the issue of power and control from the Pop Cops as well as amongst the Uppers. And there's the huge class breakdown between the Uppers and Lowers - the haves and the have-nots. I love the complexity of the novel. For me, there was quite a lot to think about in terms of control and power.

To top it all off, there is quite the sweet beginnings of romance between Trella and an Upper, Riley. I love how Trella and Riley's relationship progressed from being wary and skeptical of each other, into friends and then the borders of something more serious. I'm very much looking forward to reading more of Trella and Riley time in the next book! I really love it when there's so much uncertainty and doubt at the beginning, it makes my heart beat faster :)

I really, really loved this one. The action, the strong female character, the romance, the search for hope and better living conditions. I cannot wait for the sequel! 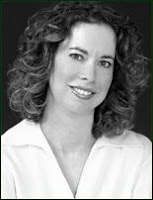 Hi Maria! Thank you so much for answering a few questions with me today! I thought Inside Out was amazing and I loved the concepts that are brought up in the novel including power, freedom of choice and class. How deliberate was that and how did the idea of writing this book come about?

Thank you for inviting me! The concepts brought up by the story weren't deliberate at all. When I write, I focus on the characters and what they want and what gets in their way, the rest just evolves as I go. The idea for Inside Out came to me in a dream, including plot, characters, the Pop Cops, the society, and even the twists! I’ve never had a dream like that before or since, and I’ve been wracking my brain to remember what I had for dinner that night :)

I have to say, Sheepy was one of my favourite characters. Did you have a favourite stuffed animal growing up?

Yes I did. I had Woo – he is a stuffed dog and he used to be pink and while. I had gotten him as a Christmas present my very first Christmas (I was 8 months old) and, according to my parents, I carried him everywhere. He's in almost all my childhood pictures and I still have him by my bedside today. In fact, when I travel more than a few days, my daughter will keep him with her at night because she misses me (and to make me feel guilty, which I do! :).

Trella and the other scrubs aren't able to keep many possessions and I was just wondering what you're most treasured item is?

This is a hard question! I'd have to say my photo albums. I've always taken many pictures and it's a visual record of my family's life.

The scrubs have some pretty grim and monotonous jobs - what's been your worst job so far?

I worked on a hazardous waste site one summer in the 100 degree Fahrenheit heat, wearing full protective gear. Every day we collected samples of contaminated soil, air, sediment and water – it wasn't fun. However, I must say the people I worked with made the job bearable.

Inside Out was one of those books for me where I just couldn't put it down and finished it at 3am - what's been the most recent unputdownable book you've read recently?

The Iron King by Julie Kagawa – I read it in two days, which, for me, is unheard of!

Thanks again for having me on your blog. I'm so glad to hear you enjoyed my book. And if your readers would like more info about me and my books, I have the first chapter of all my books on my website as well as a number of free short stories they can read. I also have a page full of writing advice for any aspiring writers out there :) Here’s the link: http://www.mariavsnyder.com And my blog is: http://officialmariavsnyder.blogspot.com

Thank you again Maria!
Written by Michelle Fluttering Butterflies at 09:05