REVIEW: Under the Duvet by Marian Keyes 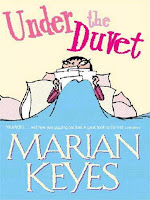 I do adore Marian Keyes. Every novel of hers that I've read I instantly love. I think she's funny and charming and intelligent. Which is why I'm shocked that it's taken me so long to read Under the Duvet. I have quite a few books on my TBR shelf (don't we all!) but part of the reason that I chose to read Under the Duvet now was reading Marian's last newsletter in which she revealed that her depression has stopped her from doing any writing. She's been on my mind lately, and I do wish her well. I've struggled with my own depression for such a long time so I feel like we have this thing in common. And I feel it even more so now that I've read this collection of essays and journalistic pieces, some of which were unpublished before this. I do so want to be friends with Marian Keyes.

Under the Duvet (with the fab subtitle of: Notes on High Heels, Movie Deals, Wagon Wheels, Shoes, Reviews, Having the Blues, Builders, Babies, Families and other Calamities!) was published roughly ten years ago and though some bits felt slightly dated (her pieces on seeing in the millenium for instance) all were written with such humour and charm. Everything Marian writes feels spot-on. I giggled my way through this one, much to my husband's horror, as I was curled up under the duvet. She writes about her life, her friends, her family, holidays, Christmas parties, her love of shoes, buying a house, learning to drive, and marriage. The essay that stood out the most for me though is her piece about her alcoholism. It's honest and touching and I'd have read the book for that essay alone. I'm eagerly anticipating her follow-up, Further Under the Duvet.