Top Ten - Favourite books of the year so far!

It's nearly the end of June, which means half the year is gone! (How is that possible, etc etc) and I thought it'd be fun to create my list of favourite books that I've read so far this year. I have been incredibly lucky and have picked up so many great books this year, so it was hard narrowing it down to just ten. (My original idea was 6, one for each month that had passed!) But these tough decisions have to be made, and I did narrow it down to 10. It's perfect timing, because I am most of the way through my 100th book of the year. This list is a wonderful way to celebrate! Check out the entire list of books (and which books sadly did not meet the cut!) read so far this year here.

In no particular order..

Nation by Terry Pratchett - I hadn't had much experience with Terry Pratchett before Nation. But then I read Nation and it knocked me on my ass. And I grew very excited to read more of his work. Another couple of books, and I'm sure he'll be included on my very extensive list of favourite authors! Here's my review.

Amazon blurb: When a giant wave destroys his entire Nation - his family and everyone he has ever known - Mau finds himself totally alone. Until he meets Daphne, daughter of a colonial Governor and the sole survivor from a shipwreck. They have no common language, no common culture - but together they discover some remarkable things - like how to milk a pig and why spitting in beer is a good idea - and must try and forge a new kind of Nation. Then other survivors arrive to take refuge on the island, and not all of them are friendly. In "Nation", Pratchett brings us a novel that is both witty and wise, encompassing themes of death and nationhood, while also being extremely funny. 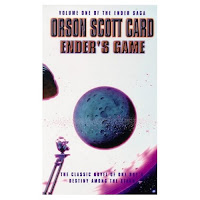 Ender's Game and Ender's Shadow by Orson Scott Card - I know, kind of cheating to include Ender's Game AND Ender's Shadow, but they were both so wonderful and I'm making the rules :) Here is the review for both of these books.

Amazon says: Ender Wiggin is Battle School's latest recruit. His teachers reckon he could become a great leader. And they need one. A vast alien force is headed for Earth, its mission: the annihilation of all human life. Ender could be our only hope. But first he must survive the most brutal military training program in the galaxy...With its explosive storyline, pump-action excitement and hugely engaging central characters, Ender's Game is 2002's absolute must-read for teenaged boys. Forget schools for wizards, this is where the *real* action is.

Neverwhere by Neil Gaiman - Oh, Neil Gaiman. How much do I love you? Neverwhere is another amazing book by Neil Gaiman. One that I was so excited to share, that I gave my copy away to the first person who showed any interest in it. I hope he loves it as much as I did. Oops, doesn't look I've gotten around to reviewing this one just yet!

Amazon says: Under the streets of London there's a world most people could never even dream of. A city of monsters and saints, murderers and angels, and pale girls in black velvet. Richard Mayhew is a young businessman who is about to find out more than he bargained for about this other London. A single act of kindness catapults him out of his safe and predictable life and into a world that is at once eerily familiar and yet utterly bizarre. There's a girl named Door, an Angel called Islington, an Earl who holds Court on the carriage of a Tube train, a Beast in a labyrinth, and dangers and delights beyond imagining ... And Richard, who only wants to go home, is to find a strange destiny waiting for him below the streets of his native city.

The Sky Is Everywhere by Jandy Nelson - Thank you very much to asamum reads who sent this book to me as the first stop on a blog tour. Amazing book. I laughed, I cried. I'm thinking of writing poetry on bits of paper and letting it float into the wind. Read my review. This book is also one of the prettiest looking books I've ever seen.

Amazon blurb: Seventeen-year-old Lennie Walker spends her time tucked safely and happily in the shadow of her fiery older sister, Bailey. But when Bailey dies abruptly, Lennie is catapulted to centre stage of her own life - and, despite her nonexistent history with boys, suddenly finds herself struggling to balance two. Toby was Bailey's boyfriend; his grief mirrors Lennie's own. Joe is the new boy in town, with a nearly magical grin. One boy takes Lennie out of her sorrow, the other comforts her in it. But the two can't collide without Lennie's world exploding...

North of Beautiful by Justina Chen Headley - I'd heard so much about this book on the blogophere, last year and I was dying to read it. When I finally did, I so was not disappointed. It was even better than I expected. Loved the self-image/identity issues and the map references. Honestly, I haven't reviewed this one yet because I'm still in that 'omg! love, love, love!' phase.

Amazon says: It's hard not to notice Terra Cooper.

She's tall, blond, and has an enviable body. But with one turn of her cheek, all people notice is her unmistakably "flawed" face. Terra secretly plans to leave her stifling small town in the Northwest and escape to an East Coast college, but gets pushed off-course by her controlling father. When an unexpected collision puts Terra directly in Jacob's path, the handsome but quirky Goth boy immediately challenges her assumptions about herself and her life, and she is forced in yet another direction. With her carefully laid plans disrupted, will Terra be able to find her true path?

I Am the Messenger by Markus Zusak - I -adored- I Am The Messenger. I thought Zusak blew me away with Fighting Ruben Wolfe, but I loved this one even more! It was almost painful how much I felt about all the characters in this book. Love. (no review as yet, but I will get there)

Amazon blurb: After capturing a bank robber, nineteen-year-old cab driver Ed Kennedy begins receiving mysterious messages that direct him to addresses where people need help, and he begins getting over his lifelong feeling of worthlessness.

Paper Towns by John Green - I heart John Green. Big time. And Paper Towns was way more than I expected. Expect to read a long, gushing review sometime in the near future. And I'm going to a John Green event! In August! How! Excited! Am! I!

Amazon says: Who is the real Margo? Quentin Jacobsen has spent a lifetime loving the magnificently adventurous Margo Roth Spiegelman from afar. So when she cracks open a window and climbs into his life - dressed like a ninja and summoning him for an ingenious campaign of revenge - he follows. After their all-nighter ends and a new day breaks, Q arrives at school to discover that Margo, always an enigma, has now become a mystery. She has disappeared. Q soon learns that there are clues in her disappearance ...and they are for him. Trailing Margo's disconnected path across the USA, the closer Q gets, the less sure he is of who he is looking for.

Monsters of Men by Patrick Ness - If I'm honest, this really is the number one book I've read all year. I can't imagine that I'll read anything better than this during the rest of the year either. Absolutely heart-racing, edge-of-my-seat exciting read. Cannot recommend the series enough. My review.

Amazon blurb: “War,” says the Mayor. “At last.” Three armies march on New Prentisstown, each one intent on destroying the others. Todd and Viola are caught in the middle, with no chance of escape. As the battles commence, how can they hope to stop the fighting? How can there ever be peace when they’re so hopelessly outnumbered? And if war makes monsters of men, what terrible choices await? But then a third voice breaks into the battle, one bent on revenge… The electrifying finale to the award-winning Chaos Walking trilogy, Monsters of Men is a heart-stopping novel about power, survival, and the devastating realities of war.

When I Was Joe by Keren David - I was so surprised with this one. I can't wait to review it. Joe is an absolutely wonderful character. He's not perfect, he makes a lot of mistakes. But my heart was with him every step of the way in this book. I LOVED his little quirk with languages, and being inside his head. Cannot wait for the sequel, Almost True, out in September!

Amazon says: When Ty witnesses a stabbing, his own life is in danger from the criminals he’s named, and he and his mum have to go into police protection. Ty has a new name, a new look and a cool new image – life as Joe is good, especially when he gets talent spotted as a potential athletics star, special training from an attractive local celebrity and a lot of female attention. But his mum can’t cope with her new life, and the gangsters will stop at nothing to flush them from hiding. Joe’s cracking under extreme pressure, and then he meets a girl with dark secrets of her own. This wonderfully gripping and intelligent novel depicts Ty/Joe's confused sense of identity in a moving and funny story that teenage boys and girls will identify with - a remarkable debut from a great new writing talent. 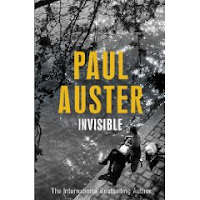 Invisible by Paul Auster - Did I ever tell you that Paul Auster is my favourite author? I read this book back in January and I loved it. But I had such a hard time working out my feelings about it that I never got around to reviewing it. It's still great.

Amazon blurb: Sinuously constructed in four interlocking parts, Invisible opens in New York City in the spring of 1967 when twenty-year-old Adam Walker, an aspiring poet and studen at Columbia University meets the enigmatic Frenchman Rudolf Born, and his silent and seductive girlfriend Margot. Before long, Walker finds himself caught in a perverse triangle that leads to a sudden, shocking act of violence that will alter the course of his life. Three different narrators tell the story, as it travels in time from 1967 to 2007 and moves from New York to Paris and to a remote Caribbean island in a story of unbridled sexual hunger and a relentless quest for justice. With uncompromising insight, Auster takes us to the shadowy borderland between truth and memory, authorship and identity to produce a work of unforgettable power that confirms his reputation as one of America's most spectacularly inventive writers.

And there we have it! My top 10 favourite books of the year so far. And I still have the rest of the year to find more favourites.

Which books would make your list of favourites of the year so far? Do any of mine make your list?
Written by Michelle Fluttering Butterflies at 09:14