Things have been a bit rough with The Boy being ill, but the other part of the problem is also my lack of motivation and organisation when it comes to getting my reviews together. I shall work on that. For now, here are some mini-reviews of books that I have read at some point this year! 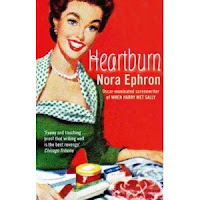 Heartburn by Nora Ephron - 'If I had to do it over again, I would have made a different kind of pie. The pie I threw at Mark made a terrific mess, but a blueberry pie would have been even better, since it would have permanently ruined his new blazer, the one he bought with Thelma ...I picked up the pie, thanked God for linoleum floor, and threw it' Rachel Samstat is smart, successful, married to a high-flying Washington journalist...and devastated. She has discovered that her husband is having an affair with Thelma Rice, 'a fairly tall person with a neck as long as an arm and a nose as long as a thumb and you should see her legs, never mind her feet, which are sort of splayed.' A delectable novel fizzing with wisecracks and recipes, this is a roller coaster of love, betrayal, loss and - most satisfyingly - revenge. Heartburn is Nora Ephron's roman a clef. It is the amusing revenge of a woman scorned: 'I always thought during the pain of the marriage that one day it would make a funny book,' she once said - and it is.

I love Nora Ephron's movies, I think she's brilliant. Earlier in the year I read a collection of her essays, I Feel Bad About My Neck, which were hilarious. I didn't really know that she'd written this novel, OR that there was a movie made of it. But after I Feel Bad About My Neck, I hunted down Heartburn, read it in one sitting and loved it. Sometimes I wanted to shout at her for the choices that Rachel makes over the course of the novel, but it all feels very authentic. I suppose because it's a fictionalised account of her own marriage break-up. Some months later, I watched the movie version, and ... it was a bit of a let-down. To be fair, it was mostly just that I didn't like Jack Nicholson. And I thought a lot of funny bits were left out or not really explained. But I did enjoy the book, there was so much there that I thought was painfully honest. I really felt for her. And honestly, all the little details just made me smile. Loved it.

Property by Valerie Martin - Manon Gaudet is unhappily married to the owner of a Louisiana sugar plantation. She misses her family and longs for the vibrant lifestyle of her native New Orleans, but most of all, she longs to be free of the suffocating domestic situation. The tension revolves around Sarah, a slave girl who may have been given to Manon as a wedding present from her aunt, whose young son Walter is living proof of where Manon's husband's inclinations lie. This private drama is being played out against a brooding atmosphere of slave unrest and bloody uprisings. And if the attacks reach Manon's house, no one can be sure which way Sarah will turn ...Beautifully written, Property is an intricately told tale of both individual stories and of a country in a time of change, where ownership is at once everything and nothing, and where belonging, by contrast, is all.

I didn't think it was possible to enjoy a book while at the same time hating the entire cast of characters. Until I read this book, that is. I didn't sympathise with any of the characters, they were all a little spiteful and hateful and bitter. I liked the symmetry between Manon and Sarah both being 'property' - one as a slave, the other as a wife. The setting was written really beautifully, as was this inner rage of these two women, but when I finished the book it didn't have any lasting impact on me. I know it won the Orange prize, and I can see that Valerie Martin can write well, but without any connection to the characters, I didn't much care.

Juliet, Naked by Nick Hornby - Nick Hornby returns to his roots - music and messy relationships - in this funny and touching new novel which thoughtfully and sympathetically looks at how lives can be wasted but how they are never beyond redemption. Annie lives in a dull town on England's bleak east coast and is in a relationship with Duncan which mirrors the place; Tucker was once a brilliant songwriter and performer, who's gone into seclusion in rural America - or at least that's what his fans think. Duncan is obsessed with Tucker's work, to the point of derangement, and when Annie dares to go public on her dislike of his latest album, there are quite unexpected, life-changing consequences for all three. Nick Hornby uses this intriguing canvas to explore why it is we so often let the early promise of relationships, ambition and indeed life evaporate. And he comes to some surprisingly optimistic conclusions.

I'm not sure I agree with the 'surprisingly optimistic conclusions' from the product description above. I found Juliet, Naked to be quite a melancholy little book throughout. If my 'optimistic' they meant 'ambigious' than I would agree. Because the ending was quite open-ended and I don't normally care for endings like that :( Overall, I did enjoy the book. Annie and Tucker have both wasted a lot of their lives, either in an unsatisfying relationship or by doing nothing, career-wise. And in Juliet, Naked they are both forced to do something about the lack of direction in either of their lives. And I liked it. I haven't been able to read any of Hornby's latest novels, but in this I did see something of what I used to like about Nick Hornby. I wish the ending were different, and the title makes me a little uneasy, but I was able to laugh at the dialogue and the characters. 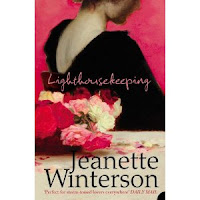 Lighthousekeeping by Jeannette Winterson - From one of Britain's best-loved literary novelists comes a magical, lyrical tale of the young orphan Silver, taken in by the ancient lighthousekeeper Mr. Pew, who reveals to her a world of myth and mystery through the art of storytelling. Motherless and anchorless, Silver is taken in by the timeless Mr. Pew, keeper of the Cape Wrath lighthouse. Pew tells Silver ancient tales of longing and rootlessness, of the slippages that occur throughout every life. One life, Babel Dark's, a nineteenth-century clergyman, opens like a map that Silver must follow, and the intertwining of myth and reality, of storytelling and experience, lead her through her own particular darkness. A story of mutability, talking birds and stolen books, of Darwin and Stevenson and of the Jekyll and Hyde in all of us, Lighthousekeeping is a way into the most secret recesses of our own hearts and minds. Jeanette Winterson is one of the most extraordinary and original writers of her generation, and this shows her at her lyrical best.

I'm beginning to really love Jeanette Winterson. I thoughts Oranges Are Not the Only Fruit was a bit strange, but enjoyed it enough to pick up Sexing the Cherry. I had issues with that, but not enough to stop me from reading Lighthousekeeping. And I've realised that with every Winterson novel, there has to involve some kind of oddness. Lighthousekeeping starts with a girl, Silver, and her mother on some weird-shaped house on a cliff with a dog that has different length legs. And then her mom falls off the weird-shaped house and Silver goes off to live with the mysterious Pew in a lighthouse and now his story is entwined with that of Babel Dark and his love affairs. And it's all a little bit confusing and if I wasn't paying attention at any point, I might have lost the plot entirely. What I got from it was the importance of stories and story-telling, and love and that each of us has darkness inside of us as well as light. I don't know how to explain it better than that. It was kind of a strange ride that Winterson took me on, but a good one.

I Was Told There'd Be Cake by Sloane Crosley - From getting locked out of her flat twice on the same day and being fired for baking a giant cookie in the shape of her boss' head, to playing bridesmaid for a friend she'd long forgotten, Sloane Crosley can do no right, despite the best of intentions. With sharp, original and irresistible storytelling that confounds expectations at every turn, Crosley recounts her victories and catastrophes, finding uproarious comedy and genuine insights in the most unpredictable places.

I think I mentioned before, the reason I picked this book up was because I'd seen it listed as a book someone else had read and she'd posted it on a forum I visit. No comments about if it was any good or anything, so no clue really as to WHY I ended up buying it in a charity shop. I hadn't heard of Sloane Crosley before I picked it up, and I did think as I was reading it 'how bizarre it is that I'm reading some random woman's essays on things' but I stuck with it, and there were some really good moments amongst the essays. I think if I'd known of Sloane Crosley before I read them, I might have had a bigger interest in what she had to say, but I did laugh at some of her misfortunes, as was her intention, I'm sure. Getting locked out of her house, being a bridesmaid to someone she hadn't seen or spoken to in years. I think her family were great, and I would have loved to have read more about them. We get glimpses of them throughout, they seem fascinating.

And there we have it. A small round-up of some of the books I've been reading this year and not reviewing!

Have you read any of these books? What did you think?

Written by Michelle Fluttering Butterflies at 12:29