REVIEW: Boy vs Girl by Na'ima B. Robert 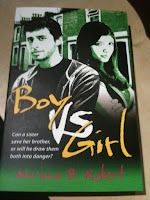 Farhana swallowed and reached for the hijab. But then she saw with absolute clarity the weird looks from the other girls at school, and the smirks from the guys. Did she dare? And then there was Malik... What should she do about him?

Faraz was thinking about Skrooz and the lads. Soon he would finally have the respect of the other kids at school. But at what price? He heard Skrooz's voice, sharp as a switchblade: "This thing is powerful, blud. But you have to earn it, see? Just a few more errands for me..."

They're twins, born 6 minutes apart. Both are in turmoil and both have life-changing choices to make, against the peaceful backdrop of Ramadan. Do Farhana and Faraz have enough courage to do the right thing? And can they help each other - or will one of them draw the other towards catastrophe?

I really enjoyed Boy vs Girl. Na'ima B. Robert contacted me and asked if I'd be interested this book, and when I read what it was about, I thought 'not something I'd normally read maybe, but I'll give it a try' and readers, I'm glad I did. But it isn't as different as I thought it would be. While it is still two teenagers caught up in making the right decisions for themselves, dealing with peer pressure and worrying about what others would think it ultimately has so much more packed into it as well.

It's the story of two kids trying to find their place in the world, being Pakistani but born in England. Which is more important? How do they find that balance between the traditional and modern? How are gender roles reconciled? How do they choose and act upon their religion without seeming too 'extreme' to other people? Judgement seems to be a pretty big theme within this book, both from those within the Muslim community and those outside of it. These are a lot of concerns that I think a lot of teenagers and adults in Britain are dealing with, and I'm glad that Na'ima B Robert has given them a voice. I hope there will be more YA novels like this one.

At the start of the story, 16 year old twins, Faraz and Farhana are about to partake in Ramadan, in which Muslims fast from sun-up to sunset and try to better themselves and re-assert their faith with themselves and through prayer. Farhana thinks that maybe this could be the right time for her to start wearing a hijab, but she's afraid of what her mother and the girls at school will think. She's also still reeling a bit from her break-up with Malik, though he still keeps calling her... Faraz, on the other hand, is keen to pursue his interest in art and a new Muslim artist he meets, but his connection with Skrooz and his gang brings more trouble for him and his family as Faraz is unable to tell him 'no' and walk away.

I really loved the twins' Auntie Najma. She plays an important role in both Faraz and Farhana's journey, but also stirs up some controversy of her own by wanting to get married to a white Muslim man. I really related to this aspect of the story, being the (half) white girl married to an Indian man. While his family didn't take issue with me, other 'friends of the family' did and caused a mini-uproar, similar to one in the book. I also loved reading about all the food preparation, the samosas and the pakoras and everything else. Made my mouth water thinking about all that tasty food! And I thought Faraz and Farhana were really sweet as brother and sister, I nearly wept at a certain scene towards the end of them together.

A big thank you to Frances Lincoln for sending me a copy for review!
Written by Michelle Fluttering Butterflies at 07:58