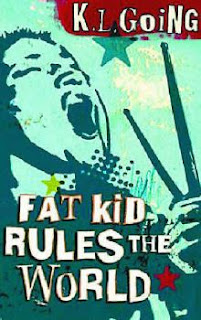 When Troy (a hugely overweight social leper) befriends Curt (a skinny homeless punk guitar genius), they both get much more than they bargained for. Troy's macho brother and ex-Marine father think Curt is just a junkie loser - but as Curt stopped Troy's suicide attempt, Troy can't just forget him. Curt recruits Troy as the new drummer in his punk band - but Troy has never played the drums in his life. When Curt's around, though, almost anything seems possible. An outstanding, heart-warming, funny, edgy, debut novel.

Right from the first page of Fat Kid Rules the World by KL Going, I was already emotionally invested in Troy. It's really heart-breaking to see through his eyes. The observations he makes really makes me feel like crying. This idea that people will laugh at a fat kid doing almost anything just upsets me - everything from how much food he eats to the way he breathes. From Troy's perspective, everyone's watching him and if not openly laughing, secretly laughing and/or making judgements about him. And this is how we're introduced to Troy, standing on a train platform, thinking of jumping. Will people laugh at a Fat Kid committing suicide?

Enter Curt. The awesome guitar-playing legend who dropped out of school and is now probably homeless and a junkie? Somehow Curt manages to get convince Troy to step away from the platform, buy him dinner AND join Curt's new punk-rock band as the drummer. It doesn't really matter that Big T, as Curt nicknames him, cannot play the drums. I really loved the character of Curt. He's a bit broken, just like Troy, but in a different way. And their relationship together is wonderful.

Fat Kid Rules the World is a little sad, as Troy worries about how he smells or if he's sweating too much around other people. He's constantly wondering why someone like Curt wants to be his friend. He thinks he's a disappointment to his father and his little brother. But with Curt's help, and his family, Troy is able to see himself differently and start to be OK with being the Fat Kid.

Even though many parts of this book are sad, it isn't a depressing book at all. It's quite funny in parts and everything moves at a really quick pace. The dialogue is great, and while the focus is mostly on Troy, the other characters - Curt, Dayle, Troy's dad, are all quite interesting and play their parts well.

I read Fat Kid Rules the World as part of Body Image and Self-Perception month hosted by Jo at Once Upon A Bookcase.
Written by Michelle Fluttering Butterflies at 13:34