Another week, another set of mini-reviews. Unfortunately this group of books are books that were either 'just OK' for me or books that I wasn't particularly fond of. These will probably be the worst and shortest mini-reviews ever, but I don't have much to say about them and kind of wanted to get them out of the way so I can focus on reviewing other books! But don't just take my word for it, if any of these sound like something you'd read, pick the book up and see for yourself. We can swap notes afterwards, if you like :)

Cut by Patricia McCormick - You say it's up to me to do the talking. You lean forward and your black leather chair groans, like a living thing. Like the cow it was before somebody killed it and turned it into a chair in a shrink's office in a loony bin! Fifteen-year old Callie is so withdrawn that she's not speaking to anyone -- including her therapist at Sea Pines, known to its guests as 'Sick Minds' -- the residential treatment facility where her parents and doctor send her after discovering that she cuts herself. Her story unfolds primarily through dramatic monologues, gradually revealing the family turmoil that led to her self-destructive behaviour.

I initially wanted to read this book because of it's subject matter. I'm sure it's no surprise that self-harm and cutting is a topic very close to my heart. I feel like it's something that should be more widely understood and spoken about. And books about the topic help spread that information, right? I think so. Unfortunately, I wasn't left with much of an impression after reading Cut. This is about a girl who's in a psychiatric hospital in order to treat her self-harm and therapy in order to find the cause of her issues and work through them. It has been awhile, so I can't remember all of the details, but I'm pretty sure that when I'd finished I thought 'well, that's over' and shrugged. I didn't care enough about the main character or the problems that she was facing. 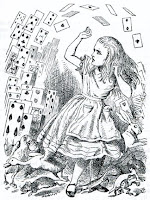 Alice's Adventures in Wonderland by Lewis Carroll - On an ordinary summer's afternoon, Alice tumbles down a hole and an extraordinary adventure begins. In a strange world with even stranger characters, she meets a rabbit with a pocket watch, joins a Mad Hatter's Tea Party, and plays croquet with the Queen! Lost in this fantasy land, Alice finds herself growing more and more curious by the minute . . .

I thought that I'd read this as a child. When I downloaded it to my phone to read at odd moments, I realised that I hadn't though obviously I still knew the rough plot from all the references in popular culture. It's quite a short story, but I wasn't enjoying it - something about the writing style irked me. I think if I wasn't already familiar with the story things might have been different. The highlight of my reading experience were the lovely original illustrations and everytime I came to one, it would put a smile on my face. I decided, based on my experience with this book, not to read Through the Looking Glass.

Dead in the Family by Charlaine Harris - If you think your family relationships are complicated, think again: you haven't seen anything like the ones in Bon Temps, Louisiana. Sookie Stackhouse is dealing with a whole host of family problems, ranging from her own kin (a non-human fairy and a telepathic second cousin) demanding a place in her life, to her lover Eric's vampire sire, an ancient being, who arrives with Eric's 'brother' in tow at a most inopportune moment. And Sookie's tracking down a distant relation of her ailing neighbour (and ex), Vampire Bill Compton. In addition to the multitude of family issues complicating her life, the werewolf pack of Shreveport has asked Sookie for a special favour, and since Sookie is an obliging young woman, she agrees. But this favour for the wolves has dire results for Sookie, who is still recovering from the trauma of her abduction during the Fairy War.

I love Sookie Stackhouse, I really do. And I was quite excited to read the latest installment. And I did enjoy it. While I was reading it, I was enjoying it. But once I finished it and started thinking about what had just happened, a lot of the enjoyment went out of it. I can't quite put my finger on just what I didn't like about it... possibly the relationship between Sookie and Eric? The overload of storylines, with the fairies and the werewolves and vampires? Sookie's witch-friend moved out and was replaced by her fairy-cousin.

It starts with Sookie feeling quite depressed after the aftermath of the fairie war. Eric is quite busy with vampure politics, Sookie gets sucked into some of the werewolf disputes. And oh, it all just didn't work for me. I know I'm not being very articulate with this review, so I'm just going to move on to the next one. I'm not giving up on Sookie though. Not yet. 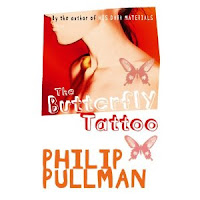 The Butterfly Tattoo by Philip Pullman - Chris falls in love with Jenny the moment he sets eyes on her at an Oxford ball. She's beautiful but secretive and he can't help but want to be with her. But fate is cruel and, as their relationship blossoms, tragedy and violence wait in the wings. Chris’s boss has a shady past that won’t stay hidden. And his ruthless enemies will use two innocent teenagers to exact their revenge on him . . .


I read this book right after going to a Philip Pullman event in Oxford. At the start, someone introduced him and mentioned some of Pullman's earlier works. At the time, I'd only read His Dark Materials and the Sally Lockhart books and one or two others. I thought those series were both so good that I was inspired to read more of his backlist. And I was very disappointed with this one. It's the story of Chris, who falls blindly in love with a mysterious girl at a party. He's working for this shady guy who is involved in some dodgy dealings and Chris gets involved.

There isn't much character development of Chris, Jenny or Chris' boss. The dodgy dealings felt bizarre and unbelieveable. The violence and the tragedy spoken of, did not impact me in any way. The Butterfly Tattoo didn't even feel like it was Philip Pullman writing it. If I hadn't had a sleeping ill child on my shoulder at the time, I might have just put this book down and walked away. But I had nothing else to read handy and I did finish it. And nothing was gained from finishing this book.

Thirteen Reasons Why by Jay Asher - Clay Jensen returns home from school to find a mysterious box with his name on it lying on his porch. Inside he discovers cassette tapes recorded by Hannah Baker--his classmate and crush--who committed suicide two weeks earlier.

On tape, Hannah explains that there are thirteen reasons why she decided to end her life. Clay is one of them. If he listens, he'll find out how he made the list.

Through Hannah and Clay's dual narratives, debut author Jay Asher weaves an intricate and heartrending story of confusion and desperation that will deeply affect teen readers.

I feel like I will have people talking about this book the most out of these mini-reviews. I bought this book awhile ago after I'd read quite a few rave reviews of it. In fact lots of people, even up to today recommend this book to me. And I can sort of see where the author was going with it. His attempt, I'm assuming, was to write a book which highlights how much people are affected by the things that we say and do, even the little things. But honestly? I can't think of this book without getting a little mad.

So Hannah has committed suicide and as a way of explaining (and placing blame on others) for this personal and difficult choice, Hannah has created a set of tapes that she's sending to thirteen people. She explains on the tapes why the tapes have been sent to these thirteen people and why each of these people have contributed in some way towards Hannah's suicide. She gives very specific instructions with what to do with the tapes and when Clay recieves these tapes mysteriously, he's very shaken up. Because he had feelings for Hannah before she died. Hannah comes across on the tapes as being very bitter and mean and I didn't find Hannah to be a verylikeable character at all.

In fact, I hated Hannah. She irritated me. And I hated how Clay interjected his own thoughts into Hannah's excruciating dialogue. I hated how Hannah blamed these other people for her decisions. She may have gone through some rough experiences but the way in which she presents her story on the tapes left a lot to be desired. It annoyed me so much, especially when reading her reasons. (the next paragraph contains minor spoilers, highlight if you wish to read it.)

The guidance counsellor thing? How on earth could he have possibly helped Hannah, when she didn't tell him anything that he could help with? And what does she think happens at parties? Just because she went to the party with her friend, it doesn't mean that her friend is going to cling to her like a limpet and not go off with a boy to make-out if the opportunity arose. And just because a friend leaves you at a party, that doesn't mean that your friend is responsible for any bad thing that might occur to YOU at that same party. I could go on. But I won't.

It's like Hannah failed to see how important her OWN actions affected what happened in her own life. Plus, I felt that the fact that she sent off these horrific guilt-inducing tapes to people was a lot more harsh than some of her petty reasons anyway. She was cruel and thoughtless and vindictive.

I'm going to leave it at that before I say something that I shouldn't.

Phew, that's over and done with. I feel a little worse now that all of that is typed up. Have you read any of these books and have a different opinion to mine? I'd love to hear it. What do you think of negative reviews? If I didn't have something nice to say, should I have not said anything at all?
Written by Michelle Fluttering Butterflies at 08:40