Even though I've been in one of my worst reading slumps ever, I've still been collecting books like crazy! Here's another bunch of books that arrived into my house in the last two weeks. As ever, IMM is hosted by The Story Siren, who is immensely awesome. 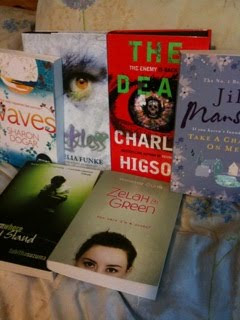 I picked up Waves because I think it will work nicely as a book for a death/bereavement project. I've been looking forward to Reckless for ages! The Dead is the sequel to The Enemy, which I loved. I adore Jill Mansell. I recently read Tabitha Suzuma's Forbidden and was keen to read some of her backlist. And I keep hearing about Zelah Green that I had to pick up this book and see what all the fuss was about! 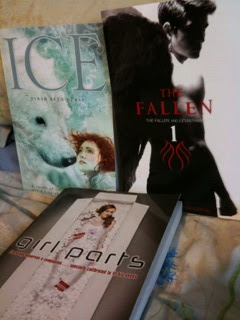 A big thank you to Keris Stainton for Ice and The Fallen, which both sound very intriguing and to Lynsey of UK Book Tours for Girl Parts! Robots, hmm? Really looking forward to all of them :)

(Also? Not very book related, but along with the books, Keris sent me the most adorable mobile phone charm in the world. It's a cute little Eeyore dressed up as Piglet! Will have to take a photo and post it soon. It's currently on my keychain, but I think I'll be moving it onto my handbag so more people can see it. I'm actually excited about this plan!) 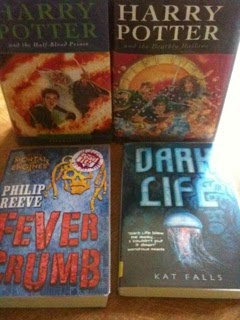 And these are from the library. I really want to read Fever Crumb, which I believe is the prequel to Mortal Engines? And Dark Life is a YA dystopic book that I've been wanting to read for ages! The Harry Potters were picked up as an emergency plan to drag me out of this reading rut. I hate not reading, I figure some wizard magic might just do the trick, if nothing else could. And that's it from me this week.


Which books came into your house recently?
Written by Michelle Fluttering Butterflies at 10:50