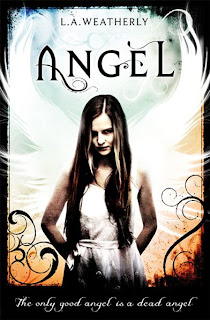 In a world where angels are beyond redemption, Alex thinks he's found one that might deserve mercy. Alex is a ruthless assassin - of angels. Forget everything you've heard about them before. Angels are not benign celestial creatures, but fierce stalkers whose irresistible force allows them to feed off humans, draining them of their vitality until there is barely anything left. As far as Alex is concerned, the only good angel is a dead angel...until he meets Willow. She may look like a normal teenager but Willow is no ordinary girl. Half-angel, half-human, Willow may hold the key to defeating the evil angels. But as the hunter and the hunted embark on an epic and dangerous journey and Willow learns the dark and terrifying secrets of her past, Alex finds himself drawn to Willow...with devastating consequences. Eoin Colfer reinvented the fairy, Stephenie Meyer reinvented the vampire, L.A. Weatherly reinvents the angel! This is a heart-pounding, knuckle-whitening, paranormal romance action-adventure for fans of the 'Twilight' series. This is the first in a devastating new trilogy.

This book is amazing. I feel incredibly lucky to have recieved an advanced reader's copy of Angel and I read it almost as soon as I recieved it. But I've been finding it hard to put into words how much I loved this one. There's so many paranormal YAs out there, but Angel felt like something new.

Angel by LA Weatherly begins with Willow, who doesn't really fit in. She much prefers the company of car engines to that of other people. Especially as she is known for her psychic ability. When a popular girl at school asks Willow for a reading, it changes Willow's entire life. Willow's eyes are opened to the word of angels. But not angels like we've ever known before. Angels in Willow's world are horrible things that suck the souls out of their victims. I've never felt so creeped out by angels as I do now!

Alex is a pretty kick-ass angel assassin. He knows what they are and what they're capable of and he's determined to kill every last one of them. Until he meets Willow, half-angel. Alex and Willow are forced to team up and together they go on this crazy-exciting adventure that involves fast cars and an epic road trip (you know how much I love roads trips in books!) and some pretty kick-ass fight scenes. I did so love Alex, with his whole sad backstory and reading about his entirely different upbringing as an angel-killer. Honestly, Angel had me absolutely enthralled with the characters, the storyline, the romance and all the action, I could hardly tear myself away from it. I did not expect to love this book quite as much as I did.

While I did enjoy this steady build-up of a romantic relationship between Alex and Willow, my only minor gripe about Angel is how once Willow and Alex were able to accept their feelings for each other, it turned into a gush-fest. I don't much care for over-the-top undying feelings in YA novels and I thought the whole lovenest towards the end was a bit much. That said, I am still incredibly excited about this book and cannot wait for the rest in the series!
Written by Michelle Fluttering Butterflies at 08:44