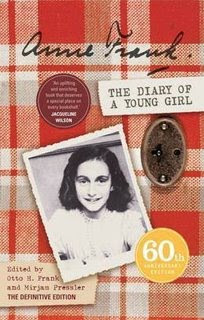 I was 11 or 12? the first time I read Diary of A Young Girl by Anne Frank. It had such an impact on me, I went through a phase of only reading about WWII that lasted years. And after reading it that first time, I started a diary. I even wrote a few entries to 'Kitty' and tried to contemplate life a bit before succumbing to gushing about my latest crush.

The diaries all came and went. I don't seem capable of maintaining a diary. I have a few that I started around the time I moved to England, but they didn't last longer than 5 months. I'm OK with that. I don't think everyone is cut out for journalling. But I do really love to read diary books. Whether real like Anne's or fictional, I love getting personal with a character, seeing into their thoughts. Some of my favourite books that I've read lately have been written in diary format and I thought today I'd have a look at a few of them.

Life as We Knew It by Susan Pfeffer - I read this last summer and it was wonderful. I loved seeing the transformation of Miranda's normal life into a battle to survive. Rationing food and water and heat. I felt like there was no other way to tell the story other than through Miranda's words. I really hope that the other books in the series live up to my high standards!

Georgia Nicolson series by Louise Rennison - There's something about Georgia Nicolson that way always makes me happy. The books are hilarious, she's absolutely mad and gets up to all sorts. Absolutely clueless about boys. Still, such fun.

Flowers For Algernon by Daniel Keyes - Would you count this as a diary book? They're progress reports, really. But that's just a fancy word for diary, wouldn't you say? I heart this book so much. So full of sadness and it really made me think. Even all these months later and sometimes I still catch myself thinking about it.

I Capture the Castle by Dodie Smith - One of my favourite ever books. I love Cassandra's voice and this sad story of disappointment and love and a whole slew of eccentricity.

The Princess Diaries by Meg Cabot - The Princess Diaries series is probably my favourite YA series ever. I absolutely adore both Meg Cabot and Mia Thermopolis. She's such a great heroine and her diaries are absolutely hilarious. It was wonderful to see into Mia's head as she struggled with her princess duties, her friends and family, her love life. I heart Fat Louie! And of course, Michael Moscovitz. I could go on and on about The Princess Diaries, but I won't. Perhaps it's time for a re-read though.

There's loads more out on the market, Diary of A Crush series by Sarra Manning. Diary of a Wimpy Kid by Jeff Kinney. I suppose The Vampire Diaries had elements of diaries, right? (I only read the first book and much prefer the TV show!) Keris Stainton's Della Says: OMG! isn't written in diary format, but her diary is central to the plot (and it's wonderful).

Do you love books written in diary format? Which is your favourite? Do you write a diary?
Written by Michelle Fluttering Butterflies at 09:23