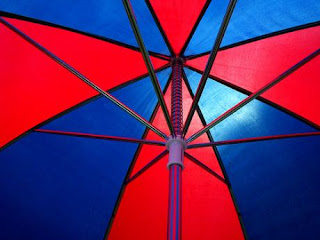 I was walking to pick my Eldest up from school the other day when an unexpected thing happened.

A woman was walking on this path up ahead of me. She stopped and stared at Littlest in his pushchar and me for a minute before turning down another path. A minute later or so, I turned the same way. The lady was just at the top of the path and we caught up with her easily. When she saw me, she said 'Oh! Are you walking in this direction?' I said 'yes' and so she says 'I am too, you can share my umbrella.' It was the nicest most unexpected thing ever. It was pouring down with rain and we walked for a good 10 minutes together. Had quite the nice conversation as well.

I told several people at the schoolyard while I was standing there waiting for E to come out. I told my mother-in-law on the phone later that afternoon. I told N. I even told people on twitter. Because it was such a small thing but it MADE MY DAY.

It seemed like such an unusual occurence. When did people stop being decent and courteous to other people? When did doing something nice become so surprising? So, together with my copy of Random Acts of Kindness by Danny Wallace, I'm going to start doing nice things for other people. It can't be that hard, right? And it does seem like the smallest, unexpected things mean so much more than something big and major. Which is great for me, because big and major aren't really accessible right now.

Email ThisBlogThis!Share to TwitterShare to FacebookShare to Pinterest
Labels: random acts of kindness