REVIEW: Getting the Girl by Markus Zusak 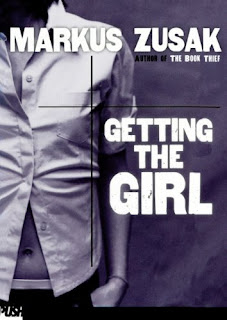 Cameron Wolfe is the quiet one in his family, not a soccer star like his brother Steve or a charming fighter with a new girl every week like his brother Rube. Cam would give anything to be near one of those girls, to love her and treat her right. He especially likes Rube's latest, Octavia, with her brilliant ideas and bright green eyes. But what woman like that would want a loser like him? Maybe Octavia would, Cam discovers. Maybe he'd even have something to say. And those maybes change everything: winning, loving, losing, the Wolfe brothers, and Cameron himself.

Cameron is nothing special. He lives at home with his dad and Mrs. Wolfe and his brother and sister. His dad has finally found a steady job and the rumours about his sister seem to have disappeared. Ruben and Cameron no longer have to fight for their honour and pride as they did in Fighting Ruben Wolfe. Cameron's eldest brother, Steve is successful and good at things, like soccer and getting out of their house and becoming someone. Ruben is charming and confident and always has a string of girls ready and waiting for him.

Cameron has never had a girlfriend. He's never even touched a girl. Instead, he is left pining over a girl who he met only briefly ages ago. He takes to standing in front of her house for hours on age, just staring. Waiting. He even has a massive crush on Ruben's girlfriend, Octavia. Of course, being a teenage male, he thinks a lot about sex, but Cameron would like nothing better than to drown himself in another person. He'd love to talk about things and really care about another person. He's very lonely, poor Cameron. He takes to writing his thoughts down and carrying the scraps of paper around with him. His writing seems to be the only thing holding him together as he goes through his days. Then things really start to change when Ruben and Octavia are no longer together and it might seem as though Octavia might actually be interested in Cam. Will he ever get the girl? Will he ever gain any confidence and belief in himself? Will his family ever see him in a different light?

What I love so much about this book, other than Cam's earnest sensitivity, is the family dynamic In Getting the Girl, the main emphasis isn't on the two brothers Cam and Ruben. But that loyalty between the two is still there, as is Ruben's easy insults about Cam. Steve and Sarah, the other two Wolfe siblings have a bigger part to play in this book - one in which threatens to destroy Cam's sense of self and the other to raise him up. I love how realistic and dysfunctional Zusak writes his families, they feel so believeable.

Cam's voice and his thumping big heart steals the show, of course. He seems very innocent and at the same time very wise and his observations of the world and of those around him and very poetic with a hint of the grittty at times. My only complaint of this novel is that it didn't last quite long enough for me. I really do hope that Zusak writes more of the Wolfe family, for they are fascinating.
Written by Michelle Fluttering Butterflies at 09:38