REVIEW: I Am The Messenger by Markus Zusak 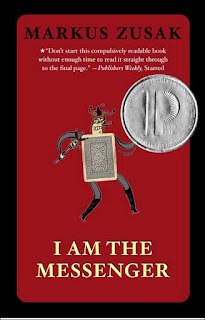 After capturing a bank robber, nineteen-year-old cab driver Ed Kennedy begins receiving mysterious messages that direct him to addresses where people need help, and he begins getting over his lifelong feeling of worthlessness.

This has been one of my favourite books that I've read all year. I really love the way Markus Zusak writes and with this story, I was pulled instantly into Ed's head and his life.

Ed Kennedy is 19. He's a cab driver and he's in love with his best friend, Audrey, who has no idea of his feelings. He really doesn't think much of himself, he think of himself as kind of a loser, living alone with The Doorman, his very old dog. After catching a bank robber, Ed is mysteriously sent a playing card in the post with addresses on them. Ed soon discovers that he's been given a task, and that he must send a message to each of the people listed on the playing card. Strangers at first and then things a little closer to home...

With the help of the playing cards, Ed is able to see clearly how much he has to offer to his neighbours, his community, his friends and family. He is finally able to connect with other people and he's in a position to help out and make a change, a difference. Ed is able to see that he does have worth, that he is important. And while it isn't always easy and Ed does struggle with some of the messages, he always tries to find the courage from somewhere to make things happen. And I think it's a wonderful message to give to teenagers these days. Don't we all sometimes think of ourselves as a bit of an Ed Kennedy?

Honestly, this book had such an impact on me. I don't want to give away too much of the plot, but some of the addresses that Ed is led to absolutely broke my heart. The old woman who mistakes Ed for the husband she lost decades ago, the poor family who is utterly and entirely happy, a young wife abused by her husband. I think it could have been very easy for Zusak to turn this story into something very cheesy and over the top, but he doesn't. It could have been preachy, but it didn't. As well as having quite a few melodramatic moments as Ed changes the lives of others, there's always lots of humour.

From the bank robbery at the beginning, to Ed's interactions with his friends and the strangers he's been led to, this book is just beautiful. Beautifully written and a lovely message sent to all of us. That we all can be more than we think, that we all have the power to change our own lives and the lives of those around us.
Written by Michelle Fluttering Butterflies at 08:46