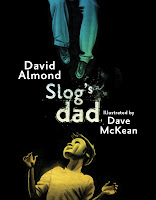 Do you believe there’s life after death? Slog does. He reckons that the scruffy bloke sitting outside the pork shop is his dad come back to visit him for one last time – just like he’d said he would, just before he died. Slog’s mate Davie isn’t convinced. But how does this man know everything Slog’s dad would know? Because Slog says it really is his dad, that’s how.

I hadn't really heard much about this one before I saw it in the library the other day. I've loved David Almond's stories in the past and couldn't pass this one up. I decided as it was quite short that I'd read it there and then in the aisles of my library's middle grade section. Like The Savage, a previous Almond/McKean pairing, Slog's Dad is a story as well as graphic novel. I think David Almond and Dave McKean both bring wonderful things to this story, from the beautiful illustrations to the sweet little story.

It didn't take me long to read, this one, no more than half an hour. This story is told through the eyes of Davie, Slog's mate. Davie doesn't believe that people can back to life after death. But Slog does. Slog thinks the homeless man outside the shops is his dad, come to say hello. And how can Davie say any thing different when he's up against Slog's total and utter belief?

The story of Slog's dad and how he died and how Slog has coped with that is told both through words and through very touching illustrations. I was left captivated by this little story and I was hoping harder than I had in awhile that Slog was right and that belief that his father has came back would be kept alive, even if his dad wasn't. The story, however, was far too short. But still, I would love to see more of David Almond and Dave McKean books in the future. Longer ones. 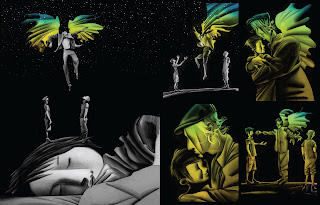 Written by Michelle Fluttering Butterflies at 09:58